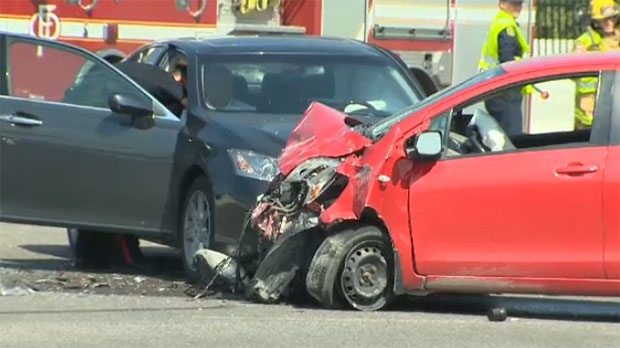 The suspect left the parking lot of the ATB in a red hatchback at a high rate of speed and crashed a few minutes later on 17th Avenue SW.

A 31-year-old Calgary man is facing charges following a robbery at an ATB branch in the city’s southwest that ended in a crash on 17th Avenue on Tuesday afternoon.

He was given an undisclosed amount of money and fled the bank.

Police say the man raced out of the parking lot in a red hatchback and was spotted by officers who were responding to the scene.

HAWCS was called in to keep an eye on the vehicle from a safe distance and to provide aerial assistance to units on the ground.

The suspect caused two crashes before getting into a collision on 17th Avenue near Sarcee Trail.

The man and a woman, who was also in the car, then tried to flee the scene of the crash and both were apprehended by police.

James Andrew Boisse, 31, of Calgary is charged with one count of robbery and is expected to appear in court on Thursday.

The female passenger in the hatchback was released and police say she is not expected to be charged.

No one in the bank was injured during the incident and the Robbery Unit is investigating.

The CPS Traffic Unit is looking into the circumstances surrounding the collisions and police say further charges may be warranted.

Police are asking anyone who may have witnessed this incident or has information to contact the Calgary Police Service Robbery Unit at 403-428-8787, or Crime Stoppers anonymously using any of the following methods: