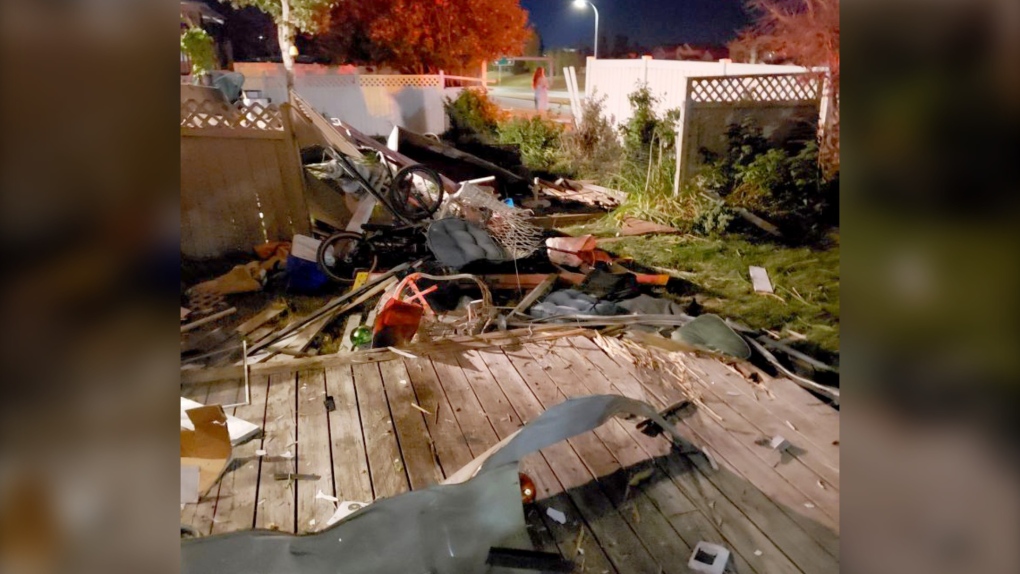 An SUV careened through a series of backyards in southeast Calgary late Sunday. (Courtesy Devin Dempsey)

CALGARY -- A resident says it sounded like a bomb went off when an SUV left the road and crashed through a series of backyards in southeast Calgary late Sunday.

Police say a blue Chevrolet SUV was travelling westbound at high speed on 130th Avenue S.E. about 10 p.m. on Sunday when it left the road and went up an inclined boulevard toward the rear property fences along Douglas Ridge Circle S.E.

"The SUV broke through the back fence, passing through several bushes, a garden shed, and a fence, before striking a wooden deck attached to the back of a home and becoming airborne," police said in a release.

"The vehicle then struck two large trees, which brought the vehicle to a stop."

Devin Dempsey was watching a movie with her boyfriend, Reed Nerland, when they heard the crash.

"One of my neighbours said they saw him going like 160 (km/h) around the corner and he lost control. I was just about to put my dog outside."

Police say a 39-year old man driving the SUV was not wearing a seatbelt and was ejected, suffering serious, life-threatening injuries.

A dog riding in the SUV also died in the crash, police said.