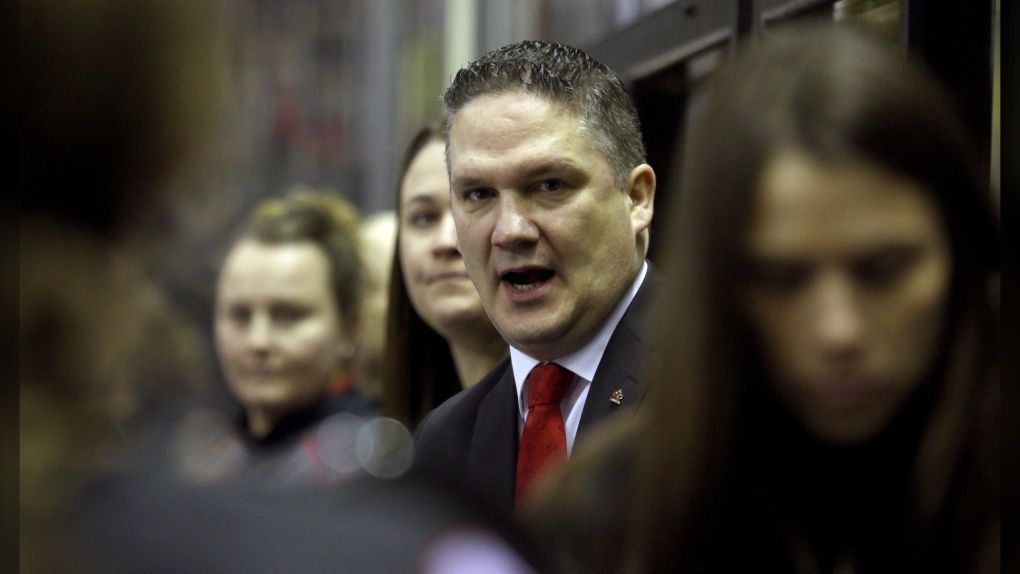 Team Canada's head coach Troy Ryan talks with players before the start of the of the Rivalry Series at the Save-On-Foods Memorial Centre in Victoria, B.C., on Monday, February 3, 2020. THE CANADIAN PRESS/Chad Hipolito

CALGARY -- Troy Ryan has been named head coach of Canada's women's hockey team for the 2022 Winter Olympics in Beijing.

Ryan, from Spryfield, N.S., was an assistant coach for Laura Schuler in the 2018 Olympics in Pyeongchang, South Korea, where Canada lost the final to the United States in a shootout.

He was also an assistant coach to Perry Pearn in the 2019 world championship in Finland, where Canada took bronze.

Ryan was named Canada's head coach for the world championship in his home province of Nova Scotia in both 2020 and 2021, but those tournaments were cancelled because of COVID-19.

Hockey Canada still intends to host the 2021 tournament Aug. 20-31 at a location yet to be named.

Hockey Canada has named the 28 players who will congregate in Calgary in July to both try out for the Olympic team and spend six months preparing for the Winter Games.

"It is an honour and privilege to be entrusted with this leadership opportunity," Ryan said Thursday in a statement.

"Hockey Canada has put together a tremendous staff to share this journey with. We are very excited to get to work with such an amazing and committed group of elite athletes on a daily basis as we prepare for Beijing 2022."

Ryan's assistants will be Kori Cheverie of New Glasgow, N.S., and Jim Midgley of Townsend, Ont., as well as goaltending coach Brad Kirkwood of Calgary.

Doug Derraugh of Arnprior, Ont., will be in a coaching staff support role through the 2020-21 season.

"This four-year Olympic quad has challenged our coaching staff with adjustments to the changing landscape of our game," Kinsgbury said.

"Troy has provided our program with consistency, and we feel he is well-suited to lead us through the 2021-22 season and to our ultimate goal of winning an Olympic gold medal.

"With limited time for competition, our coaching staff has bonded quickly, which is what we need in both short-term and long-term competition."

This report by The Canadian Press was first published May 13, 2021.