'Turk' the turkey finds a new home in Bridgeland

CALGARY -- He’s the biggest bird around and he's considered a 'free wild bird' by Alberta Fish and Wildlife.

As urban legend goes, it's believed that in the spring of 2019, Turk was brought to the Calgary Stampede grounds and given to a rancher as a gift. Turk escaped the horse trailer he was in and took up residency in Ramsay. The community adopted the bird as its unofficial mascot and a Facebook group was created with over 6,300 members.

But now Turk has moved north across the Bow River and has been frequenting the courtyard at a seniors independent living facility called Willow Park on the Bow.

"I got interested in Turk the turkey, I’d heard about him, he has Facebook, he’s very famous," said resident Marianne Jaromi. "And one morning instead of a rooster crow, I heard a turkey gobble."

Jaromi says the majority of residents have embraced their new neighbour, especially when many have been challenged with isolation during the pandemic.

"It (Turk) changes my day from being negative to being very positive," said resident Laura Pearce. "I put it (Turk) on Facebook and everybody in the world has seen it, it’s great entertainment."

Turk likes to spend time in the courtyard during the day and stays close to the double glass doors where he can see his reflection. Residents believe the bird might be lonely or even looking for a mate.

"I think he thinks that’s a playmate in there and he starts pecking at the window," said Vicky Jones, who’s lived there for seven years. "Pretty soon, he backs up and plumes out at the window and so I told him, 'You know Turk, if you think that’s that’s going to be a girlfriend it’s not, it’s you.'"

Eleven-year resident Frieda Hughes said the bird delights everyone at the building.

"Oh, he’s nice, he’s very tame and he likes people and we like him but he’s very messy." 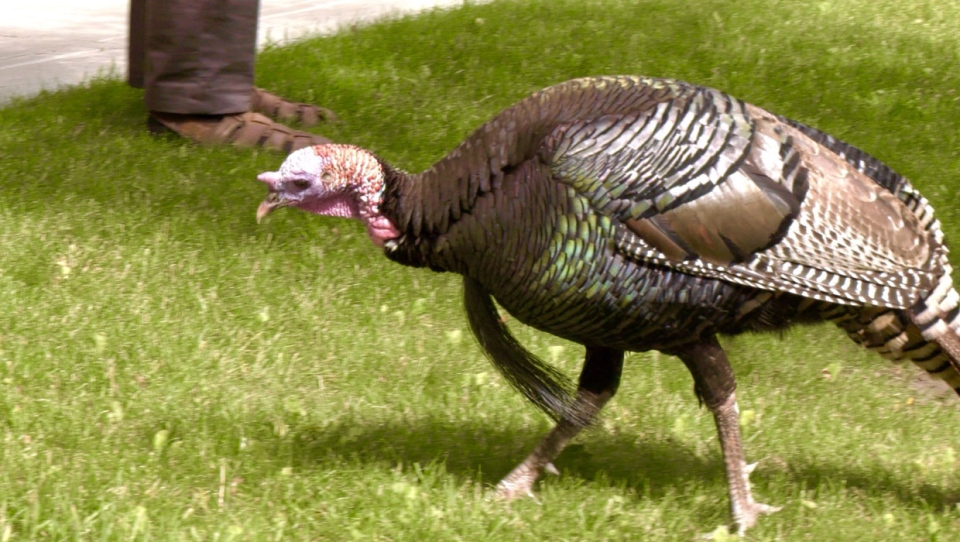 Facility management regularly wash down areas after Turk has been there to make sure no one slips on his large droppings.

"We like to have him here but we’re just worried that he’s going to get inside then the feathers will fly," said Jaromi. "Because then we won’t be able to get him out but again we’re worried about the mess, he’s a nice good visitor but it’s time to go."

Jaromi would like to see Turk go to a good home in the country but, for now, residents are enjoying his company while it lasts.