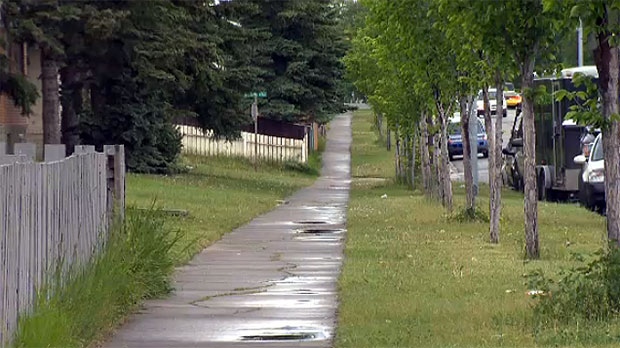 Shortly before 9:00 p.m. Friday, officers responded to an alleyway in the 5600 block of 8 Avenue Southeast following reports gunfire was being exchanged between moving vehicles.

Police have laid weapons charges against two Calgary men in connection to a shootout in a Penbrooke Meadows alley on Friday night.

Police responded to the 5600 of 8th Avenue S.E. at about 8:50 p.m. after residents called in and reported that three vehicles were driving down the alley while the occupants fired shots at each other.

The offenders were gone when police arrived but investigators found numerous shell casings in the area.

Police released descriptions of three vehicles on Saturday and say they are still looking to speak to the people who were in a dark-blue, four-door sedan, possibly a Chrysler 330, that had cardboard covering the passenger side back window.

Bader Eddin Amer, 20, of Calgary, is charged with assault and possession of a prohibited weapon.

Talal Mohamad Amer, 22, of Calgary, is charged with four counts of firearms offences and three counts of drug-related offences.

Both of the accused appeared in court on Monday.

Anyone with information about this incident, or the vehicles involved, is asked to call the Gang Helpline at 403-428-8191, or email the Guns and Gang Unit at gang@calgarypolice.ca, or Crime Stoppers anonymously using any of the following methods: