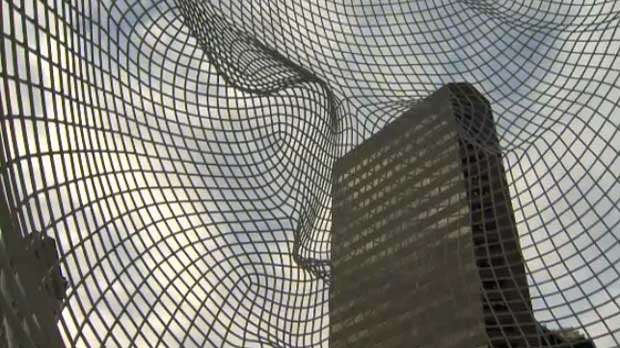 A view from the inside of the sculpture.

An art installation by one of the world’s foremost sculptures now graces the plaza outside The Bow building and is creating quite a stir among those who pass by.

The 12 metre tall, bent-wire head of a young girl called “Wonderland” was created by Spanish sculptor Jaume Plensa and was commissioned by Encana in a joint program with Cenovus.

“We put together a panel of eight participants, representatives from the city, from the local arts community, from Encana and Cenovus, from the tenants, and we launched into a search for an artist that could create something of real interesting and lasting value in front of The Bow,” said Craig Reardon, VP of Administration for Encana.

Reardon says the artist concept represents the hopes and dreams of young Albertans and the youthful energy of the tenants.

“I think it’s very different, it’s very, sort of fascinating to look at from all vantage points so I really do like it,” said Reardon “We’re a young and vibrant company and this is reflective of that.”

The sculpture has an entrance in the neck area so viewers can wander through and see what it looks like from inside.

Plensa has erected public sculptures of this kind in cities and art exhibits around the world, including Brazil, New York, London and Dubai.

“The overall quality of his work. The sort of lightness and transparency of it, those attributes at some of the other installations, made us realize that it would be good for The Bow because its fairly light and transparent itself,” said Reardon.

Plensa has been to Calgary a number of times to check on the progress of the project and will be back for the dedication of the sculpture and the building later this spring.

To view more of Jaume Plensa’s work, visit his website.