New rules announced by Jason Kenney Tuesday fall short of the lockdown of all non-essential businesses that hundreds of doctors called for earlier this month.

Health-care workers say no mask mandate, no new assistance for businesses and no changes to the overwhelmed contact tracing system are some of their major concerns with the most recent restrictions, but the biggest concern is that the system will soon be pushed beyond the brink.

“There will be deaths that will be preventable, because of policies that have not been enacted,” said ICU doctor, Darren Maryland.

He used an analogy to describe the situation.

Several doctors say half-measures only prolong the problem and raise questions about why some scenarios are acceptable while others are not.

“Because it’s not going to be sufficient and people will feel like they’ve given up some freedoms for something that hasn’t actually worked.” 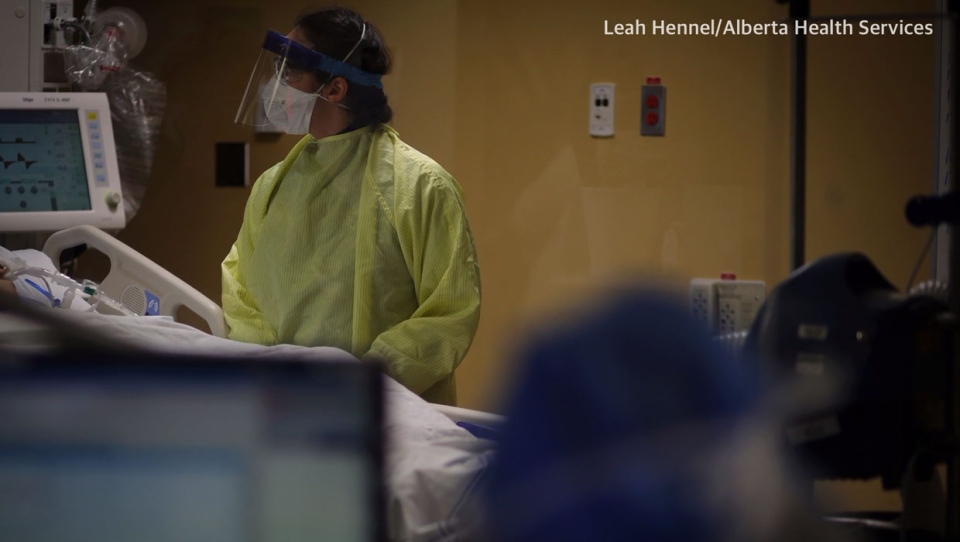 The group representing paramedics, therapists and lab workers is also speaking out.

“We are on the brink and they chose to do nothing about it,” said Mike Parker, the president of the HSAA, who added the provincial government is “choosing ideology over science.”

A choice doctors say will soon overwhelm the system.

“(In) Edmonton the ICUs are overflowing,” said Bhardwaj. “We will get to the point where Edmonton is because it’s simple math.”

Health-care workers say it is not as simple as just freeing up more beds, the problem is having people to look after those beds.

“We don’t have hundreds of health-care workers that have been skilled up,” said Heather Smith, the president of United Nurses of Alberta.

In the meantime, medical workers such as family doctors and other specialists are being re-deployed to work in areas outside their scope, which also leaves gaps in the positions they’ve left.

Smith said the latest public health measures fall extremely short of what is needed to save lives and make Albertans feel safe.

“It’s a baby step when we needed a giant leap.”