'We want to join this fight': Immigrant physicians make plea to serve on front lines of COVID-19 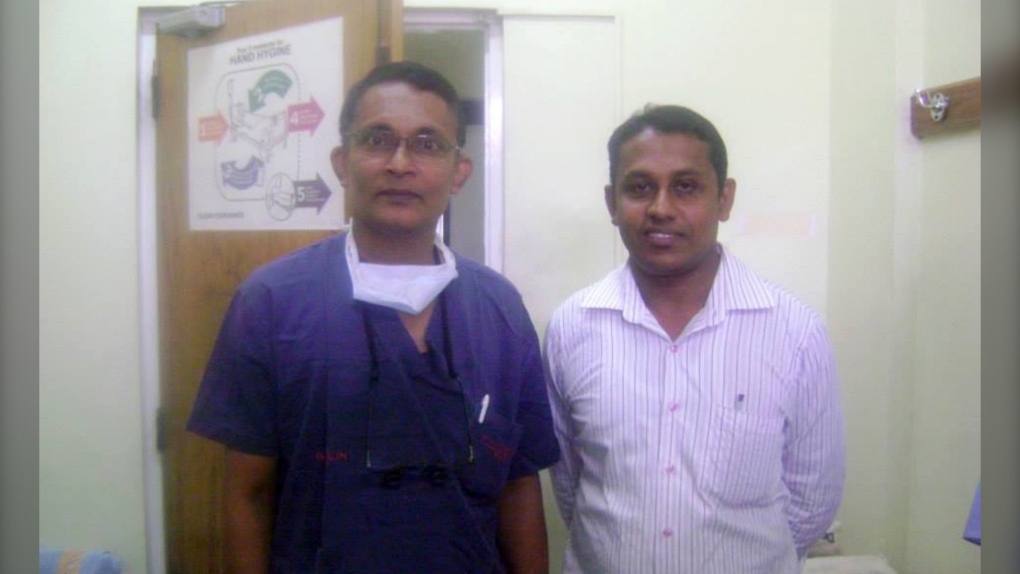 CALGARY -- In his home country of Sri Lanka, Sagara Wijesooriya has worked on the front lines to combat the deadly spread of malaria, cholera and dengue fever.

The International Medical Graduate (IMG) moved to Edmonton in March 2013 with 10 years of experience handling ventilators as a leading anesthesiologist.

The arrival of COVID-19 was, he thought, the perfect opportunity for him to utilize those skills once again, but the struggle to gain a license in Canada has held him back.

“This is very disappointing after spending all this money and sacrificing our careers. We want to join this fight with the health sector because that’s our life,” he said.

“The fight against COVID-19 is for those critical patients, so they need ventilation, and I’m very familiar with the process with my vast experience in the intensive care unit.”

The medical graduate from Sri Lanka’s prestigious University of Peradeniya had been working in primary care and also assisted conducting brain surgeries in overcrowded hospitals.

His credentials from Sri Lanka, however, are not recognized in Canada and his efforts to upgrade them have been postponed due to the novel coronavirus.

“I had a final clinical exams scheduled for May that’s been cancelled and I don’t think it will get rescheduled very soon because of this pandemic," he said.

Wijeesooriya recognizes the necessity to be qualified but notes he could work as an assistant to other physicians or other supervised support roles.

“All I want to do now is help people in need," he said. "I live here in Alberta, I settled here and I would like to give my service to the people here.”

Researchers at the University of Calgary’s School of Public Policy (SPP) agree that facilitating the licenses of immigrants and refugees would benefit Albertans.

SPP research associate Robert Falconer started writing a report on social policy trends back in December and found doctors and immigrants represent a significant portion of family physicians in Calgary.

“In 2018, there were about 300 immigrant healthcare professionals that moved to Calgary. About 70 of those were physicians and nearly half of them came from a refugee background,” he said.

“Right now there is a shortage of doctors across Canada. We have one of the lowest doctor-to-population ratios in the Organization for Economic Co-operation and Development (OECD), but there’s opportunities to reconsider how we’re licensing immigrant doctors.”

The process for accreditation is, however, quite lengthy, and comes with a variety of specially outlined steps.

Falconer says on the short end it could take at least one-to-five years for doctors to get credentials, but it could take up to a decade in some cases.

In the current situation, doctors are required to get several credential assessments, meaning all transcripts and work history must be submitted to up to four different regulatory bodies for review.

Those multiple credential assessments are combined with an official language test, followed by a practice-ready assessment which involves a residency.

Falconer says two further medical knowledge tests would also be required after that.

“This is already concerning because there’s a limited number of residency spots as it is and most of the economic class of immigrants have already done a language proficiency test when they immigrated to Canada.”

The College of Physicians and Surgeons of Alberta (CPSA) says immigrants or any physician not currently licensed to practice medicine would need to apply for registration of independent practice in the usual manner.

The college maintains that physicians licensed in the last two years would be best positioned to support Albertans during the COVID-19 pandemic.

“To provide additional medical support to Albertans, CPSA is supporting Alberta Health Services (AHS) in their collection of information from all currently licences physicians to determine who could be redeployed," it read.

CPSA has reached out to retired physicians who may wish to reinstate their practice permit as well, but other provinces have eased restrictions for foreign doctors.

In B.C., the college of physicians proposed a bylaw that would allow them to practice under the supervision of a physician already licenced in the province.

Ontario is allowing some internationally trained graduates to practice under a temporary, 30-day licence. During that time, they can work under supervision as long as they've passed exams to practice in Canada.

Falconer agrees not every doctor should be approved and there should be stringent testing, but he notes the process for accreditation could be sped up and made to be more cost-effective.

“The Irish medical council, for example, has actually waived registration fees for refugees or asylum seekers to submit applications at no cost, so that could be one opportunity there,” he said.

“We should also focus on a one-entry pathway so rather than having to submit applications multiple times, we should look at trusting one regulatory body and other colleges can take their word at face value that a specific doctor is credentialed.”

Falconer adds a trusted list of hospitals or universities with a high accreditation rate could also help with expediting the process.

The Alberta Association of International Medical Graduates — which represents 1,000 physicians from 82 countries — says the lengthy licensing process means many foreign doctors have turned to jobs in fields un-related to medicine.

The group’s executive director, Deidre Lake, notes that Alberta Health Services has invited licensed or recently retired physicians to apply for jobs in anticipation for increased staffing needs during the COVID-19 pandemic, but says many newcomer physicians are overlooked.

“The issues is not necessarily meeting the criteria for IMGs to become licensed, the issue is that IMGs are not openly competing for residency seats," said Lake.

“There may be 100 residency seats at the University of Calgary in family medicine for example, but there may only be 20 seats for IMGs to apply, so they’re very limited.”

Lake adds that the Canadian medical system has two years of residency training attached to it, but most IMGs have less experience than that so they’re not deemed eligible for direct entry.

“So the only way of getting re-licensed and re-integrates into the healthcare system is to re-do residency and so that’s very difficult given limited number of seats and the fact it’s not an open competition for IMGs."

As a result, an online petition has now garnered more than 15,000 signatures across Canada in an effort to allow immigrant doctors to offer their resources during the COVID-19 crisis.

“If Canada wants doctors available immediately for COVID-19, then the different levels government may have to look at relaxing some of those criteria,” Lake said.