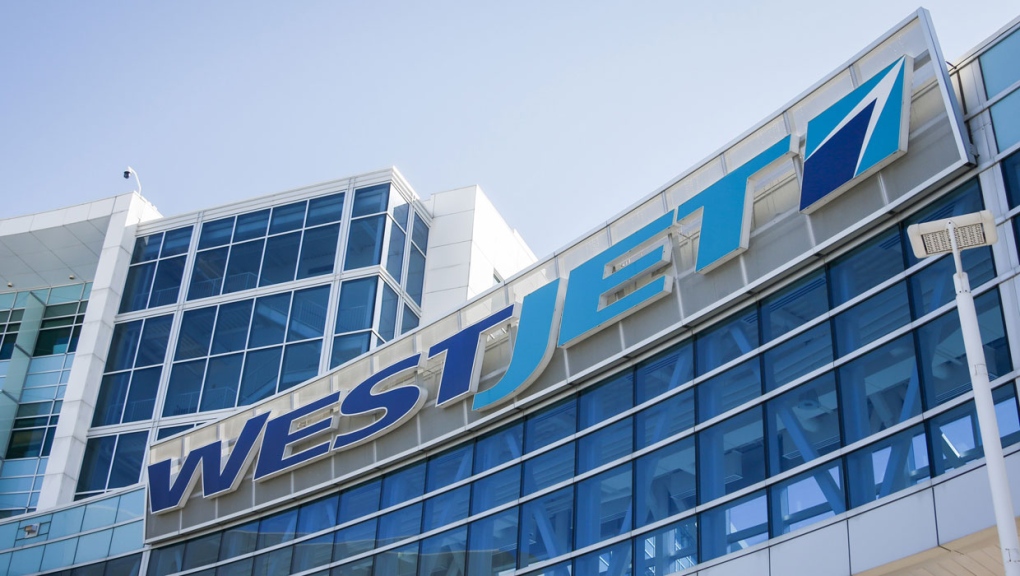 WestJet head office after the company laid off nearly 7,000 employees, in Calgary, Alta., Wednesday, March 25, 2020, amid a worldwide COVID-19 flu pandemic. WestJet says it plans to bring back nearly 6,400 employees on to its payroll with the help of Ottawa's emergency wage subsidy program. (THE CANADIAN PRESS/Jeff McIntosh)

CALGARY -- WestJet Airlines Ltd. is warning furloughed workers who receive the federal wage subsidy they will see their pay cut by up to 53 per cent starting Sunday.

The maximum weekly payment for more than 3,000 employees on furlough - a mandatory leave of absence - who rely on the Canada Emergency Wage Subsidy (CEWS) will drop to $400, down from $847, according to a WestJet memo sent out Wednesday.

In his message, vice-president Mark Porter attributed the decision to changes by the federal government to the newly extended subsidy program.

“With the (Canada Emergency Response Benefit) program coming to a close at the end of September, the objective now is to ease the transition off of the CEWS program by aligning CEWS benefits with those offered specifically by an expanded EI program,” the memo reads.

“We understand that the significance and irregularity of changes to these programs has been incredibly difficult for WestJetters.”

Flight attendants called on the government to clarify when and how much money will arrive in company coffers via the federal subsidy in order determine whether wages can return to current levels.

“WestJet can't float our wages until Ottawa fills in the blanks, so our members are seeing their cheques cut in half,” said Chris Rauenbusch, who represents about 4,000 WestJet flight attendants - 2,500 are furloughed - with the Canadian Union of Public Employees.

“It is so frustrating to see the government touting CEWS while bureaucratic bumbling and ever-changing rules leave us wondering what to expect next,” he said in a release.

“Many employees have called me in tears at the prospect they might not make rent.”

Effective Sept. 27, the pay cut applies to all furloughed cabin crew and corporate employees. It was not clear whether WestJet's 700 furloughed pilots are also affected.

The memo followed the Liberal government's throne speech Wednesday night, which extended the wage subsidy into next summer.

The program currently covers 75 per cent of a worker's normal hourly wages or up to $847 per week. For airlines, however, the vast majority of those workers have stayed at home, as passenger levels remain below 10 per cent of pre-pandemic levels amid ongoing travel restrictions and rock-bottom demand.

Unlike WestJet, Air Canada opted not to administer the wage subsidy to the bulk of its 38,000 employees, more than half of whom were laid off in June.

“Thus no one inactive is on it, meaning members are either flying (so the company would be able to collect CEWS for these members) or they are laid off, and not CEWS applicable,” said Wesley Lesosky, who heads Air Canada's CUPE component.

“We have raised the recent announcement of an extension to CEWS with the employer yesterday and are hoping for further discussions on this early next week.”

The federal finance department did not immediately respond to a request for comment.

This report by The Canadian Press was first published Sept. 25, 2020