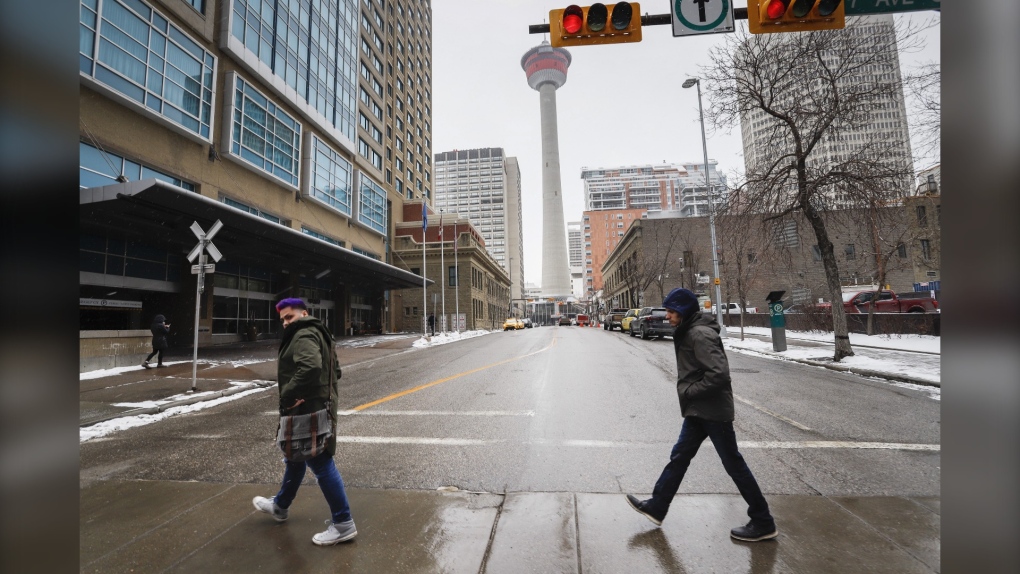 Pedestrians cross a quiet street in downtown Calgary in March 2020 amid a worldwide COVID-19 pandemic. Measures taken to control the spread of the COVID-19 pandemic are proving that long-held assumptions about how Calgary's oil and gas sector should provide and care for office workers may be out-of-date. (THE CANADIAN PRESS/Jeff McIntosh)

CALGARY -- Work-from-home measures taken to control the spread of the COVID-19 pandemic are challenging long-held assumptions about how Canada's oil and gas sector should provide and care for its office workers.

The ramifications as downtown offices reopen in Calgary could mean fewer face-to-face meetings, less travel, more flexibility for workers in where, when and how they work and, ultimately, lower leasing bills, CEOs say.

"There's been a lot of learnings from this working from home, the biggest learning being that it worked a lot better than all of us thought it would work," said Husky Energy Inc. CEO Rob Peabody.

"We've had over 95 per cent of our office staff working from home — some days it's closer to 99 per cent — and that transition was seamless, it actually worked extremely well," he said, crediting improvements in technology that allow workers to communicate with managers and each other.

"It's early days but there's no question it's going to change the way we work long-term."

Last month, commercial real estate firm CBRE reported that Calgary's downtown office vacancy rate as of March 31 was 26.5 per cent — a slight improvement from year-end — as more than one in four offices continued to sit empty even before lockdowns turned the downtown into a ghost town.

City landlords were becoming slightly more optimistic, it noted, after five years of hard times that began with hundreds of office worker layoffs during the severe oil price downturn in 2015 and an office building construction boom that started in 2014 and added almost 390,000 square metres (or nearly 4.2 million square feet) to Calgary's core.

Following the completion last year of the iconic twisting Telus Sky tower — with 40,000 square metres (430,556 square feet) of office space — and the solid 130,000-square-metre (1.4 million square feet) Brookfield Place East Tower, for a change more space was being occupied than coming on the market.

But the onset of the pandemic and the prospect of fewer people returning to the office have intervened.

"We expect there to be pressure on rental rates going down as vacancy, both head lease and sublease, is expected to increase," said Todd Throndson, managing director and principal for Avison Young Real Estate Alberta Inc.

Inventory available for sublease — space no longer needed by the company that contracted it — accounted for 24.2 per cent of all available downtown office space in Calgary as of March 31, down from a peak of nearly 50 per cent in 2015, CBRE reported.

Throndson said sublease statistics in cities such as Toronto and Vancouver, with downtown vacancy rates in the low single digits, are so low that observers don't generally bother to report them.

The forced removal of workers from the classic office setting due to the pandemic has opened many managerial eyes in Calgary and elsewhere, said Lisa Fulford-Roy, senior vice-president and head of CBRE's Canadian workplace strategy practice.

"I'm hearing from leaders and managers of organizations who thought it might be really challenging to manage teams remotely. They're upskilling and learning new skills in order to manage effectively," she said.

Long-term, she expects to see "softening of density" in the workplace as employers weigh the benefits of face-to-face collaboration and training with real estate savings, employee preferences and ongoing concerns about the safety of coming to work in the office.

In the short term, there will be pressure on landlords to work with tenants to provide assurances about security, cleaning, access, temperature checks, social distancing in elevators and other protocols, she said.

Workers may initially be allowed to "opt-in" to work in the office or at home, even if the office itself is deemed to be safe.

"What seemed to be impossible has become possible in some cases," said Carolyn Levy, president of technology for human resources consultancy Randstad Canada.

"Companies who have never imagined that they would be able to have their entire organization work remote now are able to do that."

She said the office vacancy rate in Calgary and other cities will likely trend higher and the higher rates will likely last longer than some observers expect as leases expire and companies take the opportunity to reduce office space.

The pace of the return to normalcy will depend on whether companies and landlords can make employees feel safe, she agreed.

After months of being told to stay two metres away from everyone else, follow arrows on the floor in the supermarket and disinfect if you touch anything someone else has touched, office managers are going to have to change their ways, said Jeff Moir, national human capital leader for Deloitte Canada.

"The trend in the last few years is how do you increase occupancy and reduce square foot per employee. That's probably not as desirable in the short-term," he said.

Skittish employees aren't going to be as willing to accept modern office trends such as tightly packed cubicles, shared photocopiers and narrow hallways, he said.

Employers are going to reassess the need for travel — does it really make sense to spend a day on an airplane to meet with someone for an hour, when that meeting could be done with a video conference?

Employers will have to look at costs of flexible work as well as savings, Moir said. The devices, data and communications technologies that allow employees to work from home can be expensive and may duplicate investments the company has already made at the office.

Meanwhile, the CEO of Calgary-based oilsands producer Cenovus Energy Inc., said he, too, has been surprised by how well employees have adjusted to working from home.

But Alex Pourbaix added he's worried about what might be lost if there's a rush to discard the traditional office.

"One observation everybody is having is maybe we don't need to have all of these face-to-face meetings ... I think in some ways there are some benefits," he said.

"It's been kind of an interesting experiment for five or six weeks. I think the judgment is still to be determined longer term."