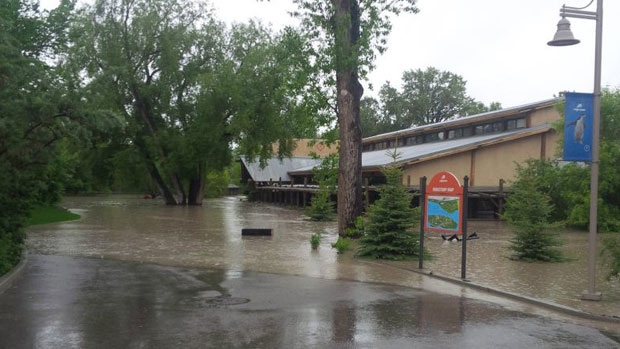 Areas of the Calgary Zoo are shown completely flooded in these shots officials posted on the facility's Facebook page.

Animal care staff at the Calgary Zoo, which was pummeled by flooding last Thursday, says a number of animals did not make it through the disaster.

On their Facebook page, the zoo says that one of their free-roaming peacocks died.

While workers tried to round up the birds, some of them flew to the rooftops and trees and weren’t able to be corralled.

Officials will conduct a necropsy on the bird to confirm the cause of death.

As well, the zoo says that Dr. Jake Veasey, director of animal care, conservation, and research says that the tilapia in the hippo pool and the piranha in the South America exhibit also died.

They say the cause of death is due to the lack of power to the island causing their inability to maintain water quality and appropriate temperatures in the tanks.

The flooding of St. George’s Island and the subsequent cleanup effort has prompted the Calgary Zoo to close its gates on the eve of the start of Calgary’s busiest tourist season.

The facility is expected to remain closed until early July.

Officials are urging everyone to stay away from the island until it is deemed safe to return.