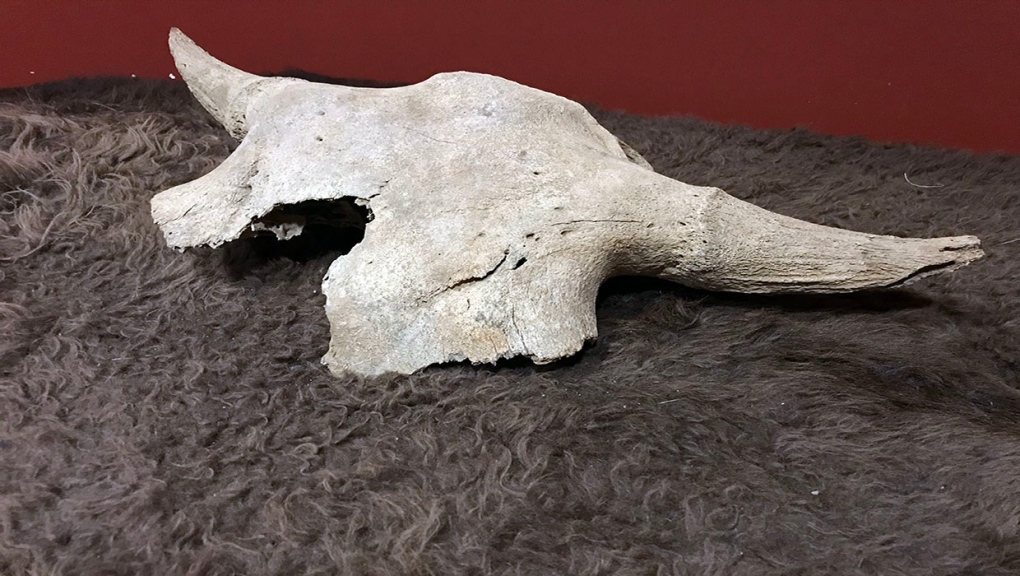 A 2,000-year-old bison skull discovered in downtown Banff was returned to the Siksika First Nation Friday

Elders and community leaders with the Siksika First Nation are celebrating the return of an ancient bison skull from the town of Banff.

It was discovered during a construction project while crew were trying to replace a light stand. Parks Canada officials contacted Siksika and the skull is now being stored at the Blackfoot Crossing Historical Park.

“It has cultural significance that has been part of our way of life since time immemorial," said Eldon Weasel Child of the Siksika band council. "It was handed down to us from the creator as a way of giving thanks for all that we receive from the buffalo."

Traditional Blackfoot territory extends to the Rocky Mountains, and many artifacts of ceremonial significance have been discovered in the parks and foothills, said Weasel Child.

The bison skull was blessed during a ceremony at Blackfoot Crossing Historical Park on Friday. Annie McMaster, Siksika Nation’s teen princess, was also on hand for the ceremony.

“Having this bison skull on display here at Blackfoot crossing park is so amazing. Siksika people have a strong connection to our traditional territory, which include the Rocky Mountains,” said McMaster.

The skull can viewed in a permanent display at the Blackfoot Crossing Historical Park in January.