EAST COULEE -- The land-locked town of East Coulee near Drumheller is known for Hodoos and dinosaur bones.

But in October it was commissioned by the Royal British Columbia Museum to mount orca bones into a life-like pose.

The catch was the museum wants to be able to remove each individual bone at any time for research purposes.

"Because this is a research specimen (there is) no drilling, no gluing, anything like that. We can’t use any consolidents or preservatives on it," said Frank Hadfield, the president of Dinosaur Valley Studios.

He adds the construction was a very delicate process.

"We don’t want to drop it, so there were some pretty tense moments at times."

To achieve their goal, Hadfield and his team came up with a way to use steel to make a frame and cradles for each bone.

Bronson Kozdas, the studios’ fabricator, said it was a challenge to get things just right and there was a lot of trial and error involved.

"While it’s (the bone) supported and sometimes at a more precarious angle than just nicely vertical, it also then has to easily lift out, so it’s a game of fighting. (You) can’t come in and pinch things cause they can’t pull out." 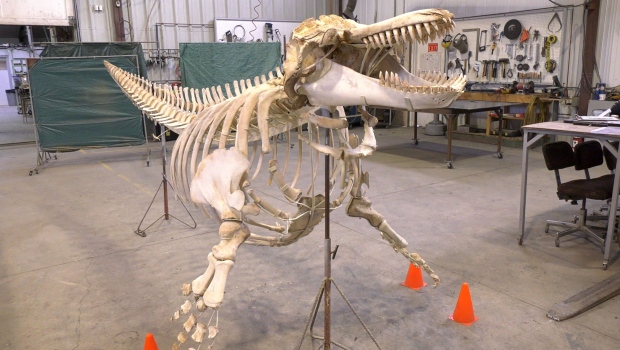 In all, 153 bones were mounted, and can be lifted out at any time.

Paleoartist Eddie Dahm is proud of their work.

"Yeah, I quite like it, the steel just melts right away (and) you can barely see it, you know, despite it being on the outside."

Now, the team is looking forward to a trip to the museum in February to help assemble the orca skeleton.

"We’re going to give them a bit of a tutorial on how to set this thing up, once you’ve had it it’s pretty easy," said Hadfield.

"But when you don’t have the instruction manual, it can be a bit of a challenge so we’re going to help them set it up and help with other aspects of the exhibit as well."

The team always has a project on the go, and, while they’re continually working on dinosaur sculptures, there just might be another whale in their future.