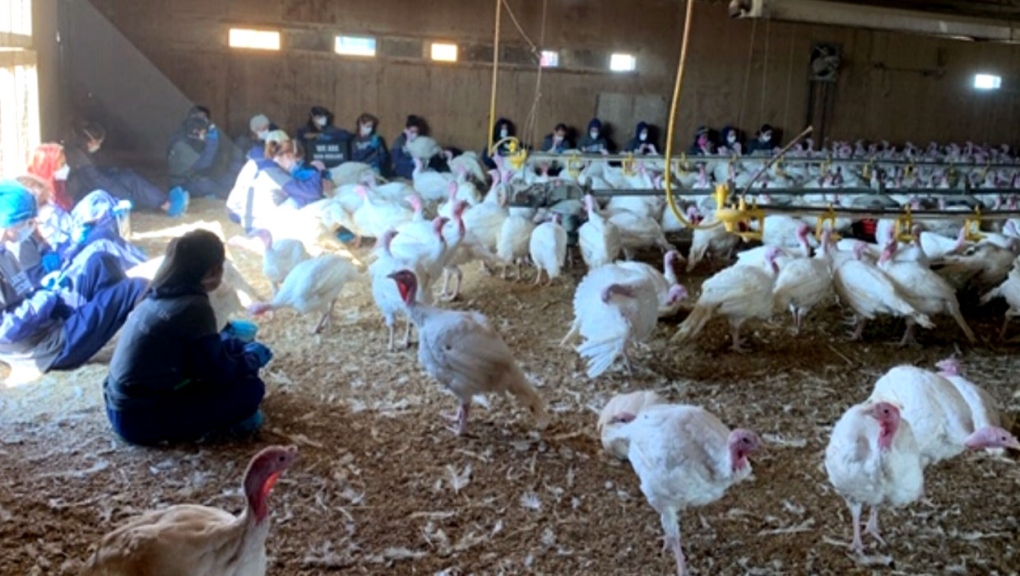 About 90 members of 'Liberation Lockdown,' staged a protest at a turkey farm near Fort Macleod on September 1, 2019.

Alberta's agriculture minister says a group of animal activists who held a protest inside a turkey farm near Fort Macleod on Monday should not have been there.

Approximately 90 members of the group locked themselves inside a number of barns on the property, claiming they were attempting to 'expose the reality' of conditions in Canadian turkey farms.

The protesters ended their demonstration after the media was allowed to film inside the facility, a number of the birds were set free and they were promised no criminal charges would be laid against them.

However, Alberta's Agriculture Minister Devin Dreeshen denounced the protesters' actions on his Twitter account, saying that "hardworking farmers and ranchers shouldn't have to deal with harassment" from such groups.

The RCMP is investigating the incident and will forward all the information to the Crown for a decision on charges.

But, police do agree there is a criminal element to the case.

"Our investigation essentially would be a criminal investigation," said Sgt. Bryan Mucha with the Fort Macleod RCMP. "There's a break and enter and mischief that occurred on the property. There's also a lesser provincial trespassing issue."

Mucha said they are still working to identify exactly who was involved in the protest.

"We do have some individual names and identification however, the process continues to make sure to see whether we have enough to pursue a charge."

The owner of the farm disputed all of the activists' claims that animals on the property were being mistreated and said it follows the standards set out by the Alberta Turkey Producers Association.