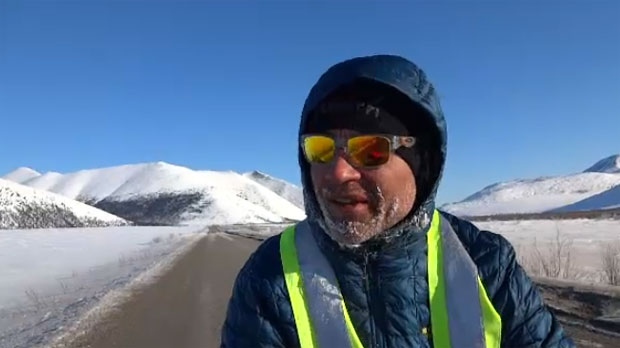 Laval St. Germain lives a life of high adventure and was the first Canadian to summit Mt.Everest without the aid of bottled oxygen.

A Calgary man has returned home after spending nine days riding the Dempster Highway from Tuktoyaktuk to Dawson City and says he highly recommends it but that it’s not for the faint of heart.

Laval St. Germain is a pilot for Canadian North and says the Arctic is one of the most iconic places on the planet for him.

“It’s a spectacular part of the world. I mean it’s a high Arctic highway, gravel through two mountain ranges. In the winter time, you’re peddling on the frozen MacKenzie River and the Arctic Ocean so why not do it?” said St. Germain.

He started his journey on March 11th and rode just over 100 kilometres a day on average.

“You need specialized equipment for these rides,” he said. “I had studded tires. I had these Tungsten studded tires and they worked perfect. I didn’t skid once and I was on ice basically for 965 k.”

He says temperatures dipped to -35 when the sun went down and were in the low -20s during the days so staying warm was a challenge.

“You pretty much prepare for a trip like this like it’s a high altitude mountaineering trip or a winter mountaineering trip and because of the extreme cold temperatures, they’re very similar, so you have to move very quickly, you have to dress properly, you can’t dress too warm, to stay on the bike, but obviously at night when it’s minus 40 range, sleeping, you have to have the best expedition gear you can purchase,” he said.

He has done the ride before and completed the journey for the first time in the summer of 2006.

St. Germain tried again last year but was forced to quit after freezing his big toe in -46 degree weather.

He says he embraced the solitude on this trip and that this year was especially poignant for him.

“In the intervening years since I abandoned the ride last year due to frost bite, my oldest son was killed in the MacKenzie River, he drowned, he was starting his career as a young bush pilot in Norman Wells and he drowned in a canoeing accident on the MacKenzie so riding the Dempster brought back a lot of real poignant memories of that two week span I spent with my kids on that road, so it was extremely tough emotionally,’ he said.

St Germain says a ride like this takes a lot of planning and experience to complete.

“Long days and when you got to the tent spot at night or the camping spot at night you’re perspiration has frozen onto your clothing and you can’t stand around, you have to very quickly set up the tent so yea, it’s not a trip for someone who is uninitiated in winter camping that’s for sure.”

He says after climbing Everest and many of the highest peaks in the world, his next adventure could be in a somewhat warmer climate.

He says he is working on a visa so he can peddle the Rub’ al Khali or empty quarter in Saudi Arabia but says that trip will have to wait until tensions in that part of the world die down a bit.