CALGARY -- The owner of a barbershop in Innisfail, Alta. attempting to operate under the guise of being a pet groomer in an attempt to work around the province's public health orders says she is feeling supported by the community and other businesses.

Klein says she doesn’t see an alternative to opening with bills continuing to add up. After being threatened with fines by Alberta Health on Tuesday, the shop was open again Wednesday, but as as a pet grooming business, as the province has not mandated their closure.

"Since pet grooming is essential service, we are groomers today, as apparently we are pets of the government," read a Facebook post announcing the move.

"We are offering pet grooming for humans!!!!! We also have dog and cat food available for purchase." 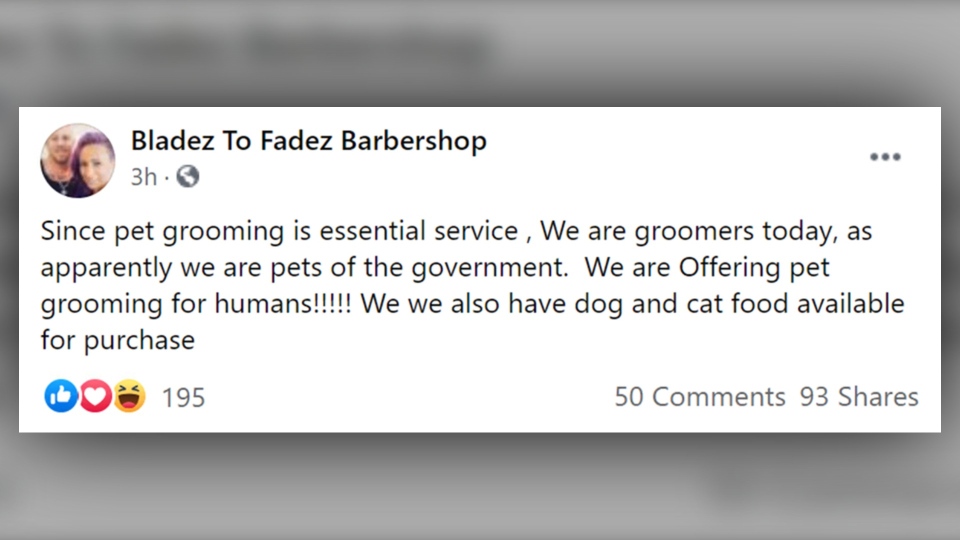 “As a parent you need to provide for your children and put food on the table and it was a hard Christmas and it shouldn’t have to be this way you know to watch your business fail,” she said.

Klein says other businesses in the area are showing support for shops reopening through donations, shout-outs, or even just calls of support, even though they’re not opening themselves.

“They don’t want the fines and I understand that but when you’ve lost everything, what’s the difference, so I’m just showing my support to those owners to stand up and something needs to change,” said Klein.

Innisfail Mayor Jim Romane made note of how tough these kinds of restrictions are on small businesses and the larger economy.

“Golly, they’re hurting and it’s bad enough with the oil and the economy the way it was with energy and then throw this and it’s one tail spin after another, so it’s very tough, very awkward,” Romane said.

Romane had recently attended a meeting with four other central Alberta towns regarding the current barbershop situation.

“They’re all understanding of our situation, it’s no different in Carstairs, Crossfield, Bowden, we’re all faced with the same scenario so it’s not a pleasant thing,” he said.

Klein, the niece of late premier Ralph Klein, reopened to customers on Monday. An Alberta Health representative, accompanied by RCMP officers, visited the shop that afternoon and threatened to issue fines of up to $5,000 per day if it stayed open.

All personal and wellness services in the province were ordered to close as of Dec. 13, 2020 as part of the province's effort to slow the spread of COVID-19.

“We’re still following all Alberta Health protocols, all measures, masks are being worn, hands are being sanitized as they come in, appointment only,” Klein said.

Klein and her husband Yanik Brazeau, who is also a co-owner of the shop — say they adhered to the province's original COVID-19-related closure in December order but refused to heed the extension announced earlier this month.