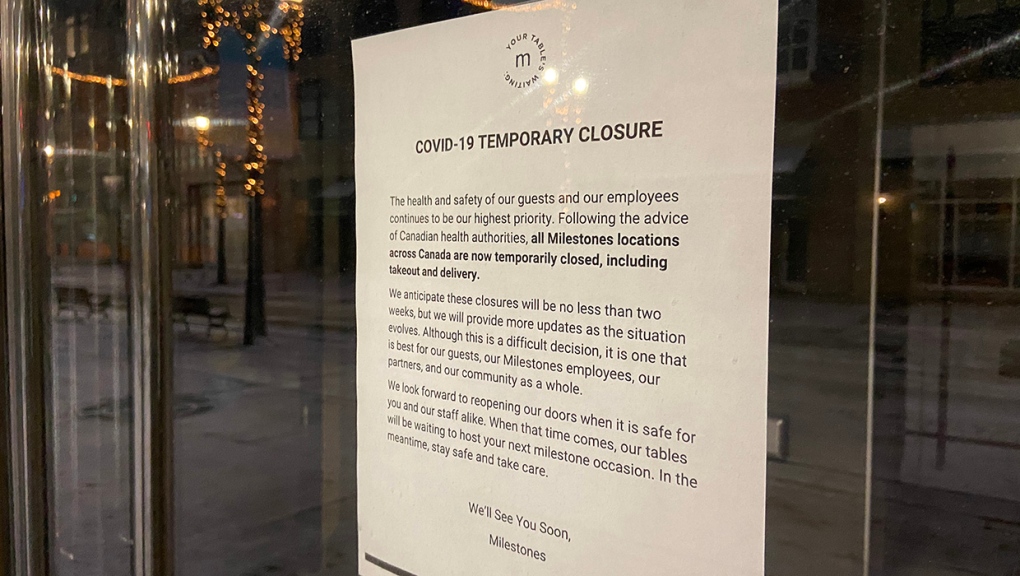 CALGARY -- A new survey from Restaurants Canada say nearly 100,000 jobs have been lost in Alberta’s food service sector since March 1.

"Not only was our industry among the first to feel the impacts of COVID-19, we’ve been one of the hardest hit so far, with nearly two thirds of our workforce now lost," said Shanna Munro, Restaurants Canada president and CEO, in a statement released Thursday morning.

"These are by far the worst numbers we have ever seen."

Alberta’s $12 billion food service industry represents about 3.4 per cent of the province’s GDP and is the third-largest private sector employer.

Restaurants Canada estimates Alberta foodservice sales will be down nearly $2.5 billion for the second quarter of 2020 if conditions do not improve.

According to the survey, nearly one-in-10 restaurants in Canada have already closed permanently.

"Urgent additional relief is required to help these businesses survive or there will be fewer jobs for the thousands of temporarily laid off restaurant employees to return to once social distancing measures are lifted."

Restaurants Canada says it is working with all levels of government to provide immediate protection and relief.

The national foodservice association is focussing on creating flexible relationships  with landlords to allow payment free-periods on rent and expanding conditions and time periods for workers to access the 75 per cent wage subsidy.

There is also hope restaurants could receive access to more working capital so they have enough funds to re-open after the pandemic.

Some assisted dying appointments to go forward amid pandemic, others on hold

How long can the novel coronavirus live on different surfaces?

Getting married amid COVID-19? This couple found a crafty solution to save their big day

Trump admin moves toward promoting broader use of face masks

Should you create or update your will in light of COVID-19?