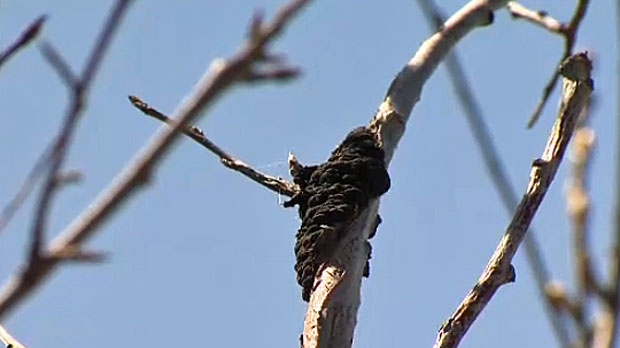 The mature galls are hard, black, 10 to 15 cm in size and may be ruptured.

A fungus is popping up on trees in the city and arborists say gardeners need to take action to keep the spores from spreading.

Black Knot is a common disease among cherry and plum trees and can kill the plant if left unchecked.

The black, tar-like swellings take a couple years to mature and can produce a significant number of spores during the bloom period.

Trees that are typically infected include:

Generally, it is not recommended to prune trees this time of year when they're growing but arborists say it's important to cut this fungus out now.

“When the weather is wet, that black thing opens up and the spores are released and then they find any open wound on another Mayday or Schubert Chokecherry tree, and then infest, and then continue on in the process. And this time of year you prune it out because this time of year you can see it. When it gets all leafed out no one sees it again and by that point all our wet weather has hit and the spores have already been spread,” said John Duncan, Manager Greengate Garden Centres.

Duncan says longer tools may be needed to get at the branches up high, but regular pruning clippers should work fine for those down low.

Some gardeners say it appears to be worse this year but Duncan says it often depends on how it is managed.

“It’s all depending on whether people cut it out, right? If everyone would do it, it wouldn’t be so bad,” said Duncan. “There’s always one yard in the neighbourhood has a really bad one and they don’t care or don’t know, a lot of times it’s just they don’t know, so they don’t prune it out and it keeps reinfesting everyone else’s.”