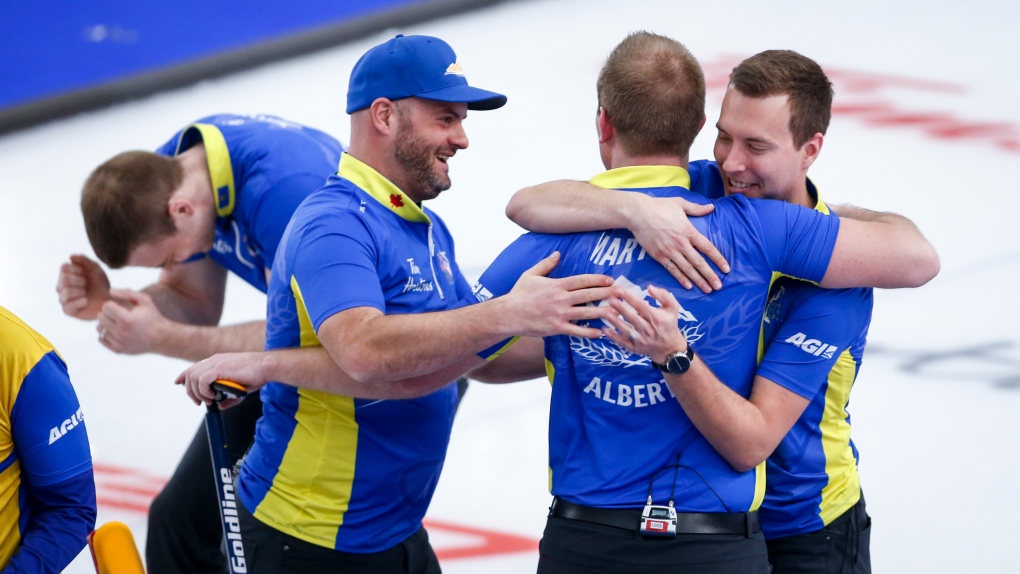 CALGARY -- Brendan Bottcher won curling's version of the Battle of Alberta on Sunday night at the Canadian men's curling championship.

Bottcher sat three in the 10th end and Koe conceded when he didn't have any options to score two for the tie.

Bottcher made it to the last three Brier finals but settled for silver each time. Koe was trying to win a record fifth Brier title as a skip.

The teams blanked five of the first six ends, with Alberta forcing Wild Card Two to a single in the third.

The game finally opened up in the seventh end as Koe flashed a stone after it picked. He missed a double-takeout to set up Bottcher for a draw for three.

Bottcher kept the pressure on by forcing Koe to make a tough double-takeout against five to salvage a single. In the ninth, Bottcher missed a double for two and settled for one point.

Down two with hammer, Koe, B.J. Neufeld, John Morris and Ben Hebert couldn't build the end for the necessary deuce to force an extra.

Bottcher and teammates Darren Moulding, Brad Thiessen and Karrick Martin enjoyed a celebratory team hug by the side of the sheet in the spectator-free Markin MacPhail Centre.

The Brier was the second of seven competitions to be held in the Canada Olympic Park bubble. The Canadian women's championship kicked things off last month.

Earlier in the day, Bottcher hit a game-winning angle-raise for a 6-5 semifinal win over Saskatchewan's Matt Dunstone.

Bottcher removed the Saskatchewan stone from the button and stuck around to score two points for the victory.

“Obviously it was a super-difficult shot,” Bottcher said. “But those are the moments we're playing for, for those kind of shots.”

Koe, from Calgary, defeated Bottcher in the 2019 final. He represented Alberta that year and Bottcher, from Sherwood Park, Alta., was Team Wild Card.

The field was expanded from 16 to 18 teams for this season only to accommodate teams that didn't get a chance to compete in provincial/territorial playdowns due to the pandemic.

Bottcher was selected to represent Alberta and Koe got the second of three wild-card entries based on the Canadian rankings.

Koe finished first in the championship pool with a 10-2 record. Dunstone and Bottcher were next at 9-3.

“The curling gods were wearing a blue sweater today. That's all there is to it. It totally stinks but this isn't the end of us.”

The last Saskatchewan team to win the Brier was skipped by Rick Folk in 1980.

Koe was trying to become the first hometown winner since Brad Gushue won in St. John's, N.L., in 2017. Gushue defended his crown the following year and also won last season.

Bottcher will represent Canada at the April 2-11 world men's curling championship in the same venue.

Bottcher was named the winner of the Ross Harstone sportsmanship award earlier in the day. Thiessen was named a first-team all-star along with Gushue, Saskatchewan third Braeden Moskowy and Wild Card Two lead Ben Hebert.

She'll represent Canada at the April 30-May 9 world women's curling championship. That event is slated to be the seventh and final event in the Canada Olympic Park hub.

This report by The Canadian Press was first published March 14, 2021.