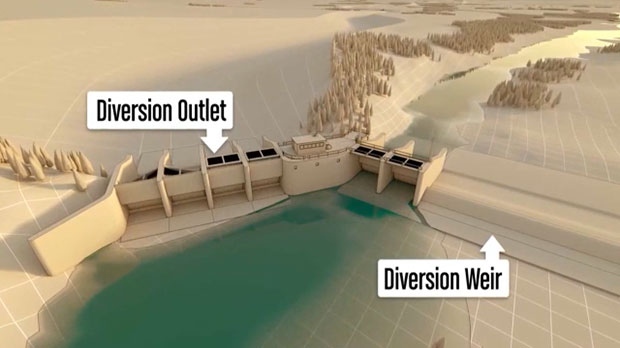 During a flood, a diversion channel would carry water from the Elbow River to the off-stream reservoir. (Alberta Transportation)

The Community of Bragg Creek says it is opposed to the Springbank Dry dam project and is hosting a townhall on Monday evening to talk about the issue.

Earlier this month, the president of the community association, Peggy Rupert, sent a letter to the provincial government stating its opposition to the proposed Springbank Dry Dam (SR1).

In the letter, Rupert says Bragg Creek supports the need for flood mitigation, especially after sustaining damage in the 2013 flood, but that the community can’t support the proposed options until ‘all other options are evaluated and regional needs are fully considered.’

The Springbank Reservoir is a $432-million project that would be located about 15 kilometres west of Calgary. It would work in conjunction with the Glenmore Reservoir to temporarily store water in the event of a flood.

For more information on the Springbank Off-stream Reservoir project, visit the website.