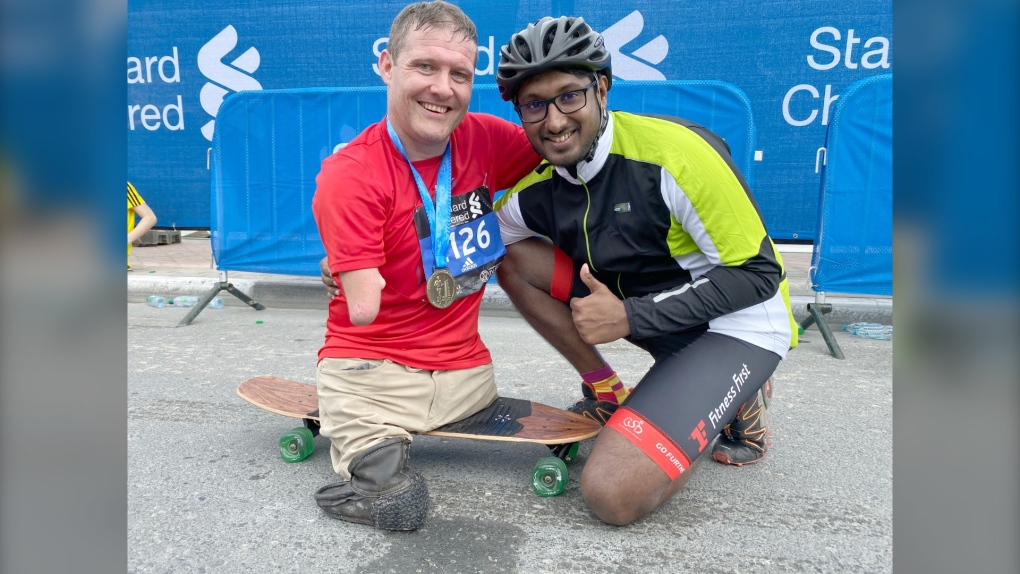 Chris Koch with Akhil, who returned his shoe, after finishing the Dubai Marathon. (Courtesy Chris Koch)

CALGARY -- Chris Koch was about halfway through the Dubai Marathon last month when he lost his right shoe.

It had already fallen off four times by that point in the Jan. 24 event in the United Arab Emirates, so the 40-year-old Calgarian made the decision to abandon it.

"The fifth time, I was getting grumpy and frustrated, so I thought, 'screw it' and I bailed on the shoe and kept going," he said.

Going without a shoe would be an issue for anyone completing a 42-kilometre course, but it was doubly so for Koch as he needed the traction it provided to push his skateboard.

He can walk but also uses a skateboard to get around and wears a customized moccasin.

Adding to his frustration was the fact he was using a new set of wheels on his board, which meant he sat slightly lower than he's used to. 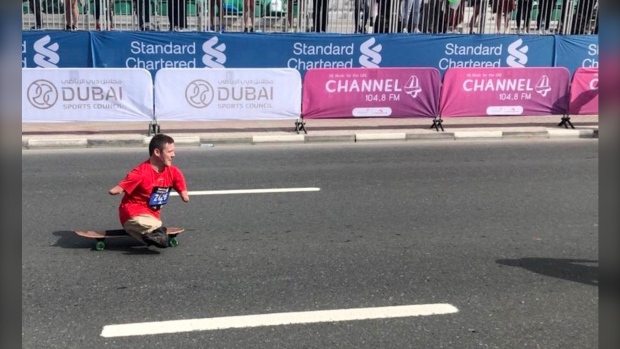 Chris Kock approaches the finish at the Dubai Marathon. (Photo by Kam Kvern)

"So when I push off and kind of swing the right leg back up to push off again, after 20 km, you get a bit tired and a bit lazy. It was starting to drag on the forward swing," he said.

He went another 10 kilometres or so wearing just a sock, and with his foot growing more and more tender with each push, he considered abandoning the race, but persevered.

And his perseverance paid off as another competitor, who was on a bike, pulled up alongside Koch, carrying his shoe.

"I put it back on and my foot had swollen a bit in the 10 km I did barefoot, so it actually fit better, so it actually worked out better in the end. It ended up being my third-fastest marathon time." 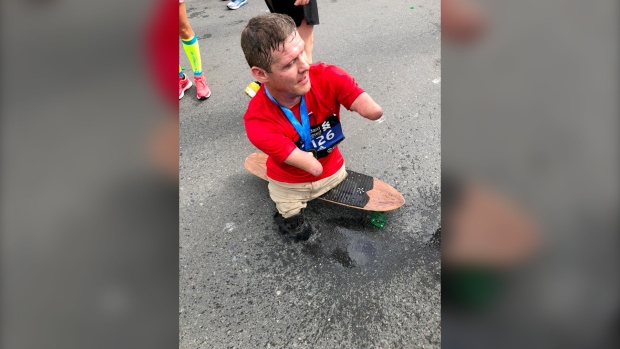 Chris Koch after finishing the Dubai Marathon. He called it the toughest of the nine marathons he's completed. (Photo by Magi Rizkallah)

"It was definitely the hardest marathon I had to work for to get to the finish line," he said.

A motivational speaker who travels the world, Koch said when thoughts of quitting creeped into his head in Dubai, his thoughts turned to the countless groups he's encouraged in the past.

"My whole message is If I Can, I want to be constantly adding new things to the list and not just talking about that one thing I did five years ago or whatever," he said.

"I want to keep pushing myself because I'm encouraging others to push themselves and raise the bar in their own lives.

Looking ahead, Koch said he has a few more marathon goals to cross off his list, namely competing in the Detroit Marathon, which crosses the Ambassador Bridge into Ontario, along with the New York City Marathon and the London Marathon in England.