Calgary city council has voted in favour of a deal to build a new $550 million event centre to replace the aging Saddledome.

After nearly four hours of discussion Tuesday afternoon, council voted 11-4 in favour of the deal between the city and Calgary Sports and Entertainment Corporation (CSEC), the group that owns the Calgary Flames, Hitmen, Roughnecks and Stampeders.

The vote followed an eight day public feedback window some councillors categorized as “rushed.” The city and Flames unveiled the terms of the arena deal on July 22nd. Since then, more than 5,000 public comments were collected by the city. 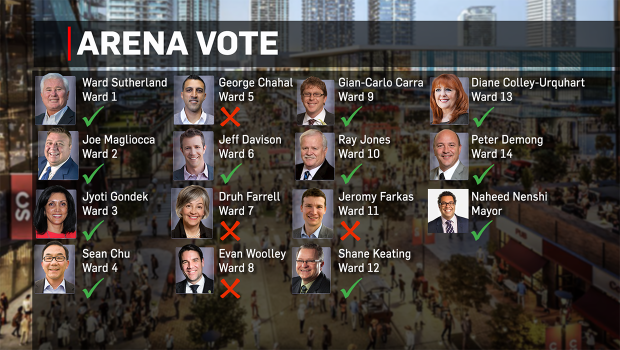 The City of Calgary and CSEC will each pay $275 million of the new arena’s $550 million price tag. The city will own the building, but the Flames will cover the costs of the maintenance, operations and repairs to the building for 35 years.

“We could not be more thrilled. This is a great day for Calgary, the Flames and hockey. We look forward to launching an exciting future for this wonderful team in its new home and are grateful to the citizens of Calgary, the City Council and Mayor Nenshi,” said NHL Commissioner Gary Bettman in a statement on Wednesday.

The city will have to pay an estimated $12.4 million to demolish the Saddledome while the Flames will kick in $1.4 million.

CSEC will earn a majority of the revenue from every event at the new building. The city will earn a two per cent ‘facility fee’ from events, which is estimated to amount to $155 million over the course of the lease. The city will also receive $250,000 per year for the first ten years from the naming rights to the arena.

The Flames’ ownership group also has the option of purchasing and developing nearby land, including the site of the Victoria Park bus barns and the empty site where the Enoch House used to stand.

The Calgary Municipal Land Corporation will now start design work for the new building, which will be built in east Victoria Park, north of the Saddledome.

There will be extensive public consultation on the look of the new arena, according to councillor Jeff Davison, who’s the chair of the Event Centre Assessment Committee and handled negotiations with the Flames for 14 months.

Construction is expected to start in 2021 with doors to the new arena opening in 2024.