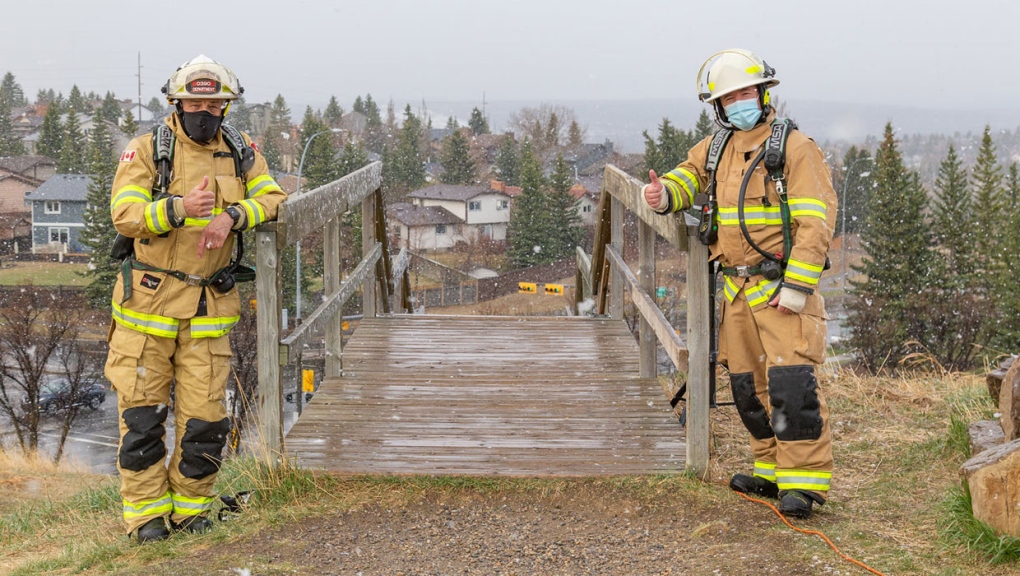 CALGARY -- Calgary's fire chief was declared the winner by a very tight margin during an online fundraiser to support cancer patients Sunday.

Wellspring Calgary, an organization that provides programs and services to help people living with cancer, kicked off its two-week-long event with a traditional stair climb between CFD Chief Steve Dongworth and CPS Chief Mark Neufeld.

Both officials put on 50 pounds (22.7 kilograms) of firefighters' gear and met outside the Edgemont Community Association for the stair climb competition.

The victor says the race won him bragging rights but the real winners are the people the charity supports.

"The Firefighter’s Stairclimb is an extremely worthwhile event," said Dongworth in a statement. "I have participated every year since its inception for a number of reasons. Firstly, in support of all Calgarians who are fighting cancer on a daily basis. Secondly, in memory of those who I know personally, who have fought, and in some cases fought and lost, their battle with cancer. And finally, because of the sense of camaraderie in joining others in raising both funds and awareness for those battling cancer today and in the future."

Neufeld adds his appreciation of Wellspring and the work they do.

"It's always a pleasure to participate in the annual Challenge the Chief Firefighter Stairclimb event to support those living with cancer. Wellspring is a very deserving organization and the work they do within the community is made possible through fundraising efforts and by bringing Calgarians together for events like these.

Even as Dongworth and Neufeld settled their score, the work to support Wellspring Calgary isn't over. Between May 2 and 15, hundreds of firefighters as well as members of the public will take part in their own stair climb.

"In most years, this is a live event at Calgary’s The Bow, but this year will be a virtual event – with new ways to involve and engage participants," Wellspring said in a release. "What remains the same is that individuals will still have to climb the same number of stairs as The Bow tower, 1,204 steps (774 vertical feet), and firefighters must climb in full duty gear."

Anyone interested in participating can go to calgarystairclimb.com for details.