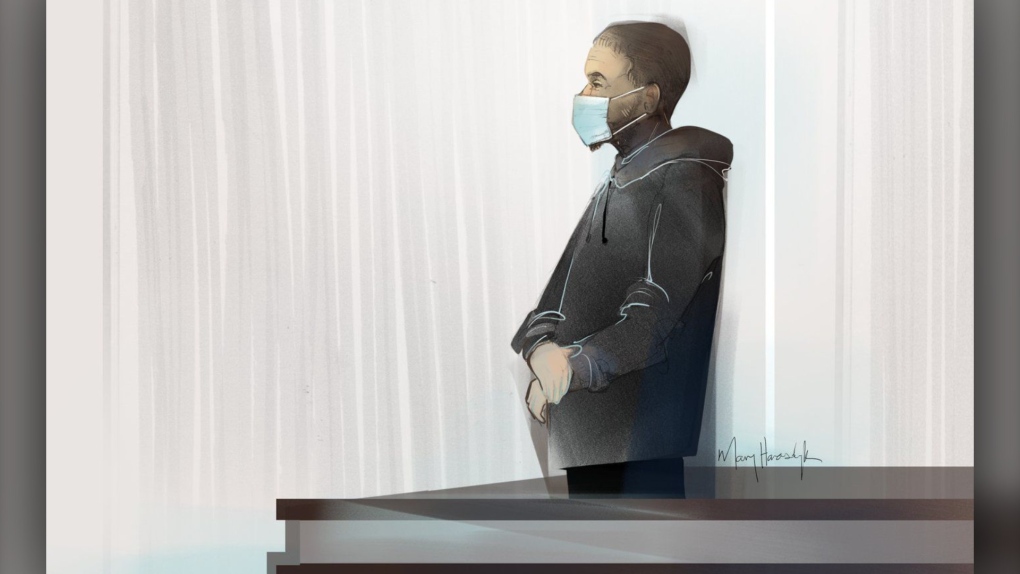 Hussein Borhot is seen in a courtroom sketch in Calgary on Thursday, April 28, 2022. Borhot, who pleaded guilty to terrorism-related acts with the militant group Islamic State, was sentenced Thursday to 12 years in prison. (THE CANADIAN PRESS/Mary Haasdyk)
CALGARY -

A man who admitted to terrorism-related acts with the militant group Islamic State has been sentenced to 12 years in prison.

"Quite clearly, you intended to assist or facilitate the activities of a terrorist group. You carried that plan into action," Labrenz told Borhot as the judge accepted a joint sentencing recommendation from the Crown and the defence.

"This was an extremely serious and grave crime."

Borhot pleaded guilty last month to one count of participating in terrorism group activity between May 9, 2013, and June 7, 2014, as well as to kidnapping for a terrorist group while in Syria.

The joint submission recommended eight years on the first count and another four years for the kidnapping.

RCMP arrested Borhot in July 2020 after a seven-year investigation.

An agreed statement of facts read in court in April said he travelled to Syria through Turkey to join the Islamic State.

The statement said he signed up as a fighter, received substantial training and excelled as a sniper, but did not tell his wife or father before the trip.

Court heard that Borhot revealed much of the information to an undercover officer after he returned to Canada.

Before the judge's decision, Crown prosecutor Kent Brown said it was important to keep in mind that Borhot participated in acts of terrorism.

"Once he decided to join up with ISIS, virtually all his activities were terrorist activities," he told Labrenz.

Borhot's lawyer, Rame Katrib, said he and his client agreed to the sentence after lengthy discussions with the Crown.

"Mr. Borhot has tendered a plea of guilty, when there were a lot of issues that could have been litigated, but he has taken responsibility," Katrib said.

"He's been back in Canada since these offences occurred," he said. "He's been here many years and in that time period he has built a family, he's worked, he's led a quiet life."

Borhot, he noted, was free on bail with strict conditions that included wearing an ankle-tracking device, complying with all laws and checking in regularly with authorities.

"When he goes to jail, he is leaving behind a family. He has four children."

Katrib said the prison term not only takes into account a fit sentence but rehabilitation as a possibility.

"Mr. Borhot left the organization of his own volition and returned to Canada," he said.

"The entirety of the family was never supportive of this type of thing and even now are very ashamed of what's happened, as is Mr. Borhot."

This report by The Canadian Press was first published on May 26, 2022.

Danish police said several people had been hit by gunshots at a shopping center in the capital Copenhagen on Sunday, and one person had been arrested.