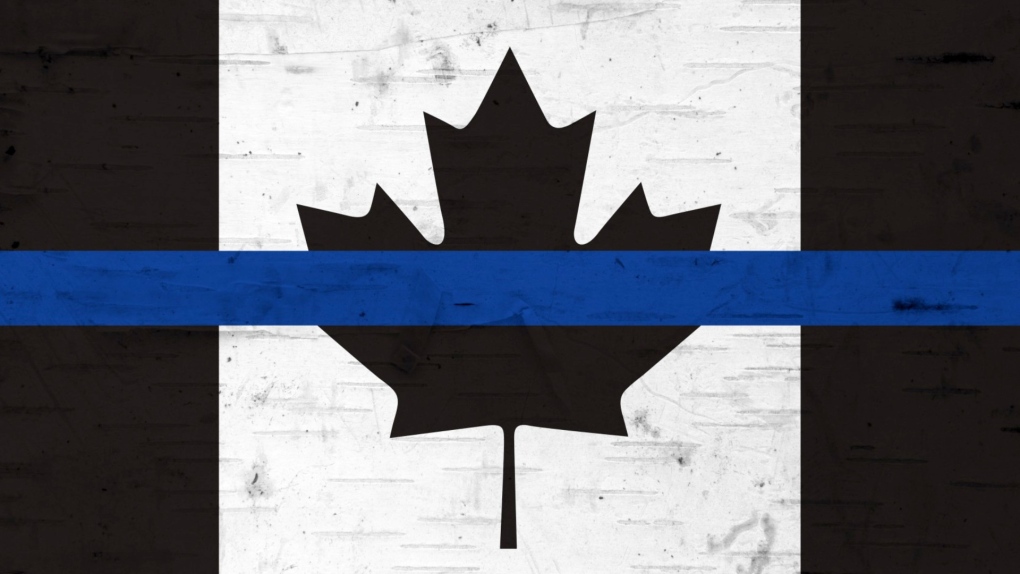 Calgary police officers have been directed to stop wearing 'thin blue line' patches on their uniform as of May 31, 2022. (Calgary Police Commission)

Saying they will need to be replaced with "a symbol that better reflects the values of Calgarians," the Calgary Police Commission has ordered on-duty police officers to stop wearing 'thin blue line' patches on uniforms by Friday.

The decision was announced Wednesday by the Calgary Police Commission.

"While the thin blue line patch was never approved for officers to wear, it started regularly appearing on uniforms when officers were issued external body armour that includes places to attach patches," read a release.

"Officers have been allowed to continue wearing the thin blue line patch while the consultations on it were occurring, but all on-duty officers will now be expected to stop wearing it by the end of the month."

Officers and family members wear the patch "to honour the fallen" and express support for those who serve, "however, the thin blue line also has a contentious history with roots in division, colonialism and racism, most recently being prominently displayed at counter protests against the Black Lives Matter movement," read a release.

"We know members of the service support the principles of community policing, being committed to those they serve and nurturing trust," said Calgary Police Commission chair Shawn Cornett.

"Members have also told us through engagement surveys that they are committed to addressing racial injustice and being respectful and compassionate toward all Calgarians, even those who do not reflect the views of the majority."

Calgary Police Association president John Orr said he doesn't know what the punishment will be if officers continue to wear the patch after Friday, adding a "substantial" number of officers currently wear one.

"However, we feel quite strongly the symbol is an important one for policing," he said. "It has been misused and misrepresented by some, however it has very real meaning to us."

A year-long consultation process was held — involving two Calgary police associations and Beyond the Blue, which supports police families, along with several community groups like the Anti-Racism Action Committee and the CPS Community Advisory Board — where some Calgarians "have clearly expressed that the thin blue line patch on police officers makes them uncomfortable due to its history and current use by groups opposing racial equity," said Cornett.

"As policing evolves, so must its symbols. Discontinuing the use of a symbol that is undermining some Calgarians’ trust in the police is the right thing to do," she said.

The two police associations and Beyond the Blue are now working with an independent creative agency hired by the commission to design a new symbol that can be authorized for officers to wear. The invitation has not yet been accepted but remains open.

Orr said the CPA learned about the redesign plans on Monday.

"At this point, however, I don't believe there's enough trust between the members I represent and the Calgary Police Commission to realize that without any new symbol losing its meaning," he said.

Can’t see it happening. This symbol honours all of the brothers & sisters who made the ultimate sacrifice, in the line of duty. It’s a symbol that shows solidarity for one another through the trials/tribulations of the career. #BackTheBlue #ThinBlueLine #Calgary #Police #yyccc pic.twitter.com/El9gw72ih4