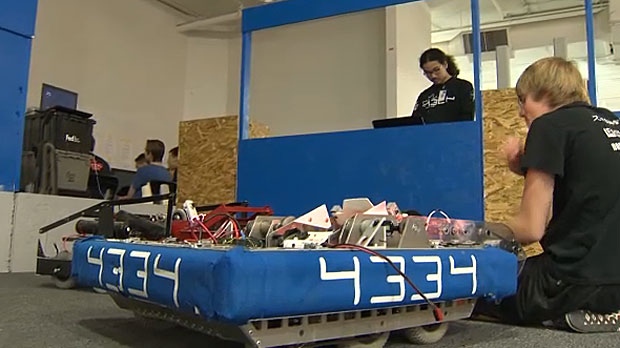 Alberta Tech Alliance and Swat Bots will both be working out of a big building at Northland Mall to build their robots for a huge competition in six weeks.

Dozens of teams from across the continent who are competing in a big robotics competition got a look at what they’ll be building this season on Saturday.

Two local teams are in the field for the North American ‘First’ Robotics Competition and every year the organizers choose a special theme to spice things up. This year, it’s deep space.

Over the next six weeks, the teams will then have to work together to solve a number of challenges with their robots that they’ll have to design from scratch.

The competitors involved say it’s a fierce task to take on.

“It can get pretty intense. It’s a lot of coordination between all of the sub-teams so that electrical knows what mechanical is doing and mechanical knows what programming is doing and programming knows electrical,” says Cool Kornak, who is in his second year with the program. “It’s a lot of hard work making sure that everything on the robot is working.”

Kornak says the best part is seeing how the idea transforms along the way.

“Seeing the robot start from just concepts and progress to a fully-functioning robot to do the task that we want it to do,” he says. “Every year the robot comes out to different sizes and shapes, but it’s always a fairly substantial robot.”

This year, the two Alberta teams; ‘Alberta Tech Alliance’ and ‘Swat Bots’ have an advantage with having a large building dedicated to building and testing their creations.

Full information about the robotics competition can be found online.