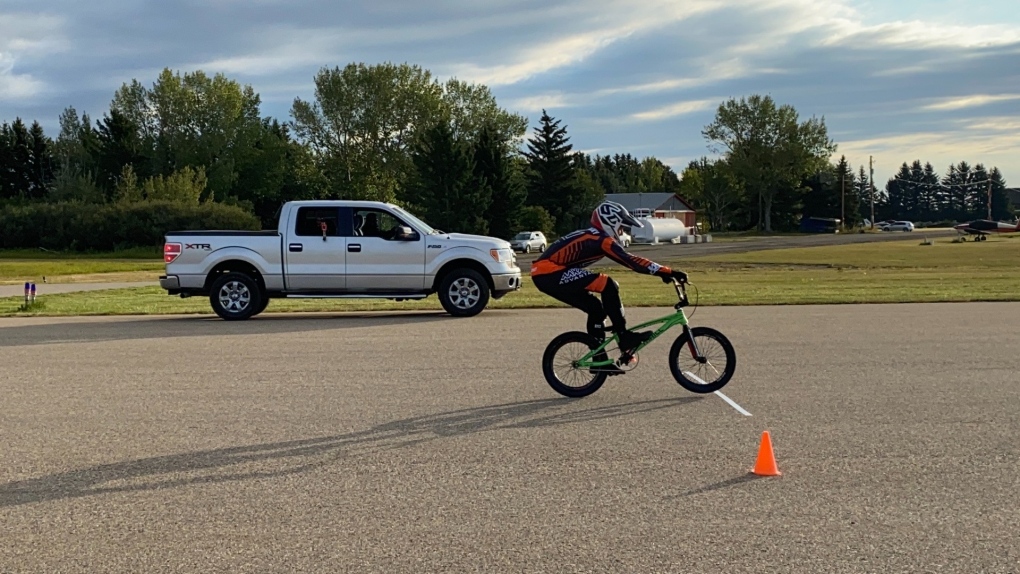 Max Ganakovsky set a new world record for the longest manual on a bicycle in August, which has now been recognized by Guinness World Records. (Courtesy Igor Ganakovsky)

CALGARY -- A Calgary teen has nearly doubled the world record for the longest bicycle manual, which is now recognized by Guinness World Records.

Max Ganakovsky, 16, set the new world record of 648.27 metres for the manual in August, besting the mark of 338.9 metre previously held by New Zealander Harry Denton.

A manual is the act of coasting on the back of the wheel of a bike, similar to a wheelie but the difference is there’s no pedaling.

The idea to attempt beating the world record came to Ganakovsky — who trains as a BMX rider — last April and was brought on by the impacts of the pandemic.

“Because of COVID, everything just got canceled,” said Ganakovsky. “The next big thing for me was to challenge myself and also prove myself to the world of what I'm capable of doing.”

In preparation for the attempt, Ganakovsky’s training was similar to what he does for BMX — weight training and bike riding — and he also credits B-Line Indoor Bike park for helping.

“I do my manuals inside the bike park, as well as other skills related to BMX racing, including the sprint training, which was crucial for this event,” Ganakovsky said.

“The B-Line bike park helped me out a lot because they set up a split lane for me to train for not only for BMX racing, but this particular record.”

Ganakovsky originally had meant to do his attempt in June when he first received his instructions from Guinness but had an accident that resulted in his collarbone breaking into three pieces.

“That was a major setback since I had surgery and the recovery process was around two months," he said.

“So, because of all the complications I ended up actually attempting the world record in late August."

Looking forward to this year Ganakovsky is still facing uncertainty with the pandemic still ongoing but is still preparing for competitions that could potentially go on.

“Those are my current goals but at the back of my mind even if they do get cancelled because of the complications this year, some personal goals that I have for myself is just being better on my bike," he said.