EDMONTON -- Alberta Health says another 22 cases of COVID-19 were confirmed Wednesday and the Calgary Zone is still leading the province.

Details on the new cases were released from Alberta's chief medical officer of health, Dr. Deena Hinshaw during her daily update. She also added while most are travel-related, the number of community cases is growing.

"Since yesterday we have confirmed 22 new cases of COVID-19. This means that 119 cases have now been identified in our province. We suspect that six of these cases are community transmission."

Community transmission is big concern for health officials, Hinshaw said, but doctors are working to determine where these transmissions are happening.

"Current information indicates the two of these cases are in Calgary. And three, in Edmonton, who do not have obvious sources of their illness. In addition, one case in North Zone seems to have acquired infection while in Edmonton. This is concerning."

Since it opened last week, the online assessment tool for COVID-19 has had over 1.3 million visitors.

Hinshaw says the province is also testing more individuals for symptoms of the illness than any jurisdiction in North America.

"We have performed close to 15,000 tests," she said. "To put that in perspective, that means we have done one test for approximately every 290 Albertans. Our lab is doing amazing things."

Calgary continues to be a hotspot

So far, 86 cases of COVID-19 have been confirmed in the Calgary Zone and Hinshaw says that could be attributed to a larger proportion of people who travel internationally but there are other factors too such as clusters of illness. 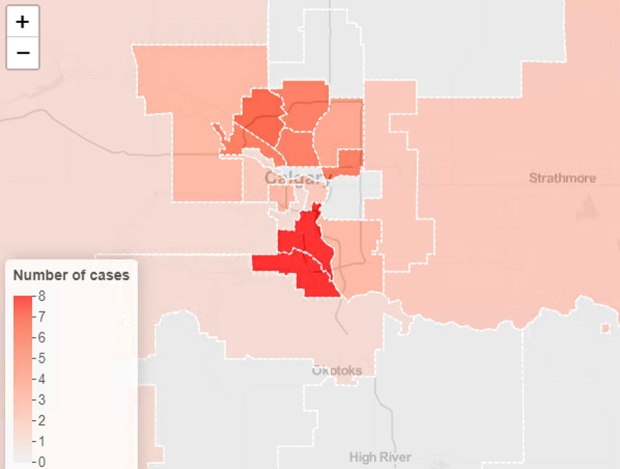 "There was one particular home meeting where one individual had come from outside the country and several others at that meeting became symptomatic. I want to emphasize that in that particular case, no one did anything wrong."

She says since the situation has been changing so quickly, that particular meeting took place before the province had established measures to order anyone coming back to Canada from an international destination to self-isolate themselves for 14 days.

The province now has full information about the current cases of COVID-19 and where they've been found in each particular health zone.

Coronavirus outbreak among homeless would be 'devastating,' experts warn

N.L. announces strict measures, including jail time, to halt the spread of COVID-19

Transat, Porter move to suspend all flights as border closes to contain COVID-19

When will life be back to normal? Not anytime soon, experts say

How to apply for the Canada Emergency Response Benefit

Reasons for optimism? How humanity is turning the tide on COVID-19

New coronavirus can survive on some surfaces for days: study

How to protect your mental health during the COVID-19 pandemic

Is a second COVID-19 wave coming? Answers to that and other questions

There's an unlikely beneficiary of coronavirus: The planet