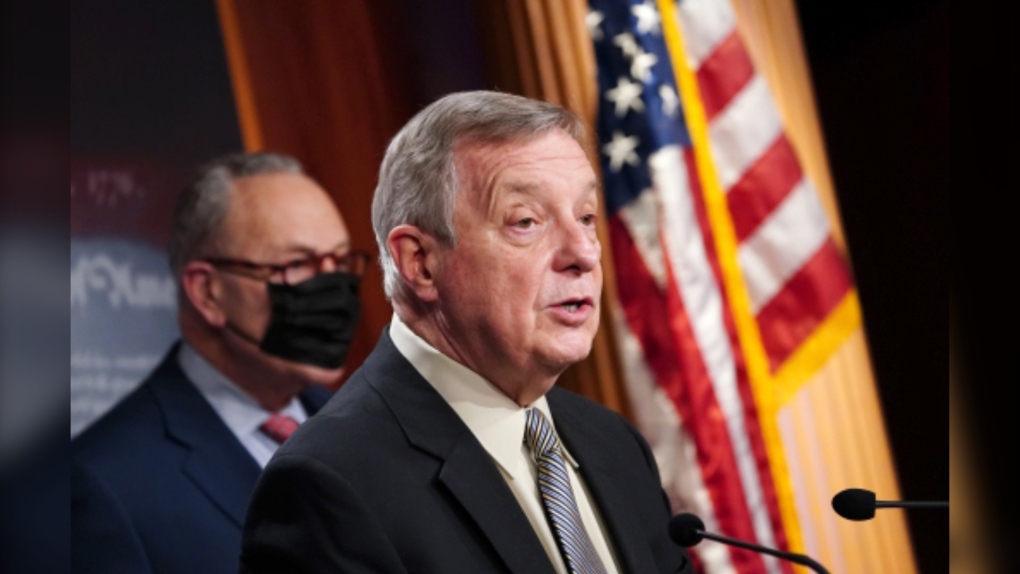 WASHINGTON -- The latest pipeline dispute between Canada and the United States is back on the agenda in Ottawa.

Enbridge owns and operates Line 5, a vital cross-border energy link that Michigan Gov. Gretchen Whitmer has vowed to shut down.

Whitmer is convinced the dual pipeline, which runs beneath the Straits of Mackinac that connect Lake Michigan and Lake Huron, poses too severe a threat to the health of the Great Lakes.

Michigan has refused to concede that the state's own experts have concluded there are no clear alternatives to the pipeline, he wrote to the governor in a letter earlier this year.

“It also fails to account for the significant adverse social and economic impacts that will result from closure.”

Prepared remarks by Agnew and Henry indicate the chamber is taking a hard line as part of a concerted “Team Canada” approach to opposing Michigan's efforts to shut down the line.

“Revoking the easement and shutting down Line 5 will create significant repercussions for Canada and the U.S. economies,” Henry, the chamber's senior director of natural resources, says in his opening statement.

Cutting off the pipeline, which moves some 540,000 barrels of fossil fuels a day through Michigan, would cost $65 billion in direct revenue and $28 billion of indirect revenue in annual trade.

It delivers more than half the state's propane demand, supports 29,000 jobs in Sarnia, Ont., alone, and would require 800 rail cars or 2,000 trucks a day to replace its capacity, the statement adds.

“There is no alternative to Line 5, simply because the capacity to absorb the products moved through Line 5 does not exist.”

Andrew Leach, an economist and business professor at the University of Alberta who specializes in the energy sector, said the Line 5 dispute is shaping up as a major sticking point between Canada and the United States.

Keystone XL, the TC Energy expansion project that Biden shut down on his first day in the White House, proved a bilateral irritant throughout President Barack Obama's two terms as president.

Biden's decision prompted a fierce reaction from Alberta Premier Jason Kenney, who has promised to take “every legal recourse” in hopes of recouping the province's multibillion-dollar investment.

Whitmer, meanwhile, is a close ally of Biden who was on his original list of potential running mates before he made her a vice-chair of the Democratic National Committee.

“The combination of Gov. Whitmer's connection to the Biden administration, the probably ill-advised opening gambits from Alberta and to some degree Canada, digging their heels in as they did, probably made it more likely that this becomes the next flashpoint,” Leach said.

The difference between Keystone XL and Line 5, he added, is that the latter is a pre-existing pipeline that has been demonstrating its importance to both countries for nearly 60 years.

“You don't need to do hypotheticals about this,” Leach said. “It's very clear.”

This report by The Canadian Press was first published March 16, 2021