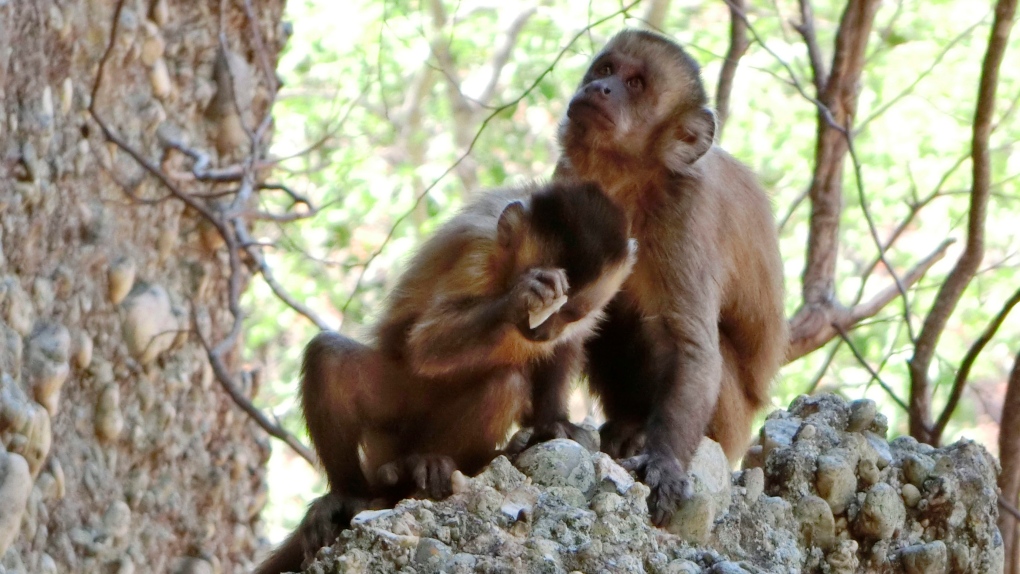 In this photo made available by the journal Nature, a young bearded capuchin monkey strikes a stone against another in the Serra da Capivara National Park in Brazil in 2014. (Michael Haslam/AP)

CALGARY -- An international effort to study the similarities behind human evolution and that of an especial primate was bolstered by intestinal skin cells collected from stool samples of capuchin monkeys through a revolutionary method.

The University of Calgary-led project, which took place over several years, had researchers from Canada, the United States, Costa Rica, the United Kingdom, Spain and Japan, identifying capuchin monkey genes responsible for its large brain size and the longevity of the species.

"We wanted to look at capuchins in a comparative context across other primates and mammals to see if we could find signatures of selection on traits that make capuchins unique amongst monkeys, and that are also trademarks of human evolution," explained senior author Dr. Amanda Melin, associate professor in the Department of Anthropology and Archaeology and Canada Research Chair at the University of Calgary.

The capuchins, which are native to Central America and South America, are able to adapt to significantly different habitats even during times of drought or famine, have the largest brain to body size ratio of all monkeys and have a lifespan capable of exceeding 50 years.

Researchers were able to sequence high-quality, whole genomes from fecal-sourced cells to compare the genomes of capuchin populations from varying habitats and identify variances in genes involved in metabolism, kidney function and water balance.

"By putting the monkey feces through a flow cytometer, we were able to pull out epithelial cells that had passed through the gut and use them for genome sequencing," said lead author Dr. Joseph Orkin, who, at the time of the study, was a postdoctoral scholar in the Department of Anthropology and Archaeology and Alberta Children’s Hospital Research Institute at the University of Calgary.

"This technique made it much more like working with high-quality tissue samples but from a safe, non-invasive origin. Using fecalFACS is a new way to study the population and conservation genomics of wild animals that before was prohibitively expensive and difficult to do."

The results of the research into capuchin monkey genes, The genomics of ecological flexibility, large brains, and long live in capuchin monkeys reveal with FecalFACS, have been published in The Proceedings of the National Academy of Sciences.