Catalytic converter thefts up 432 per cent over 2018 in Calgary

CALGARY -- Calgary police are dealing with a four-fold increase in the theft of catalytic converters from vehicles.

In 2018 there were 48 catalytic converter thefts reported in Calgary compared to 205 already this year.

Catalytic converters contain precious metals like platinum, which can be extracted and sold.

"It's not only the platinum that comes from catalytic converters, but there's other precious metals as well," said Calgary police Sgt. Doug Crippen. "We've actually developed strong relationships with a lot of the metal recyclers in the Calgary area to really work towards a collaborative approach to addressing these crimes."

Despite that, he insists the thefts are not likely the result of a criminal organization.

"This is not your traditional organized crime," Crippen said. "What this is is opportunistic crime. These are predominantly crimes of opportunity where the vehicle has been left unsecured or creates that easy access for that offender."

Steve Hyde, owner of Stevens Auto, said the damage done to vehicles resulting from catalytic converter theft can be expensive.

"Depending on the make and model, it can write off a car," he said. "The people selling stolen catalytic converters and the people that are buying them, they should be held accountable."

Thieves appear to prefer large vehicles, in part because the converters are larger and worth more, but also because they have high clearance and are easy to access from below. Southland Transport has had its fleet of school buses targeted several times this year.

"It can do considerable damage to a bus," Loose said. "It does get very expensive. Southland has beefed up security in light of the catalytic converter thefts." 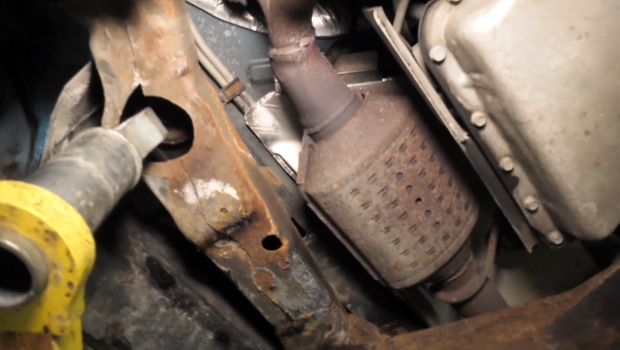 Loose wouldn’t go into detail about what measures Southland is taking to prevent future thefts, only revealing the company has "dramatically beefed up security" and installed countermeasures, so that  "if something did happen, we would be able to identify any parts of ours that were stolen should there be any kind of recoveries."

Calgary police say that’s exactly what vehicle owners should do if they are concerned about catalytic converter theft.

"We try to work with them as well to try to give them some preventive advice and work through our crime prevention through environmental design” said Crippen.

"Put a good alarm on there and create as many barriers as you possibly can so that these people don't see it as an opportunity.

"Light up your parking lot areas," he added. "Use physical security, in some cases, use alarm systems on both the premise and the vehicle. Really it's all about trying to take that opportunity because offenders that we traditionally deal with, they will look for the easiest targets."

Police are also concerned that many catalytic converter thefts have gone unreported.

"If we don't know about it, we can't effectively address crime," said Crippen. "So what we really want to do is make sure that we know about the crime and that we can start working towards putting investigators on these type of crimes and try to figure this out."

While Calgary’s 432 per cent jump in catalytic converter thefts is large, the 205 stolen this year pales in comparison to what is happening in Edmonton. Since October 2019, 320 catalytic converters have been reported stolen in Alberta’s capital.