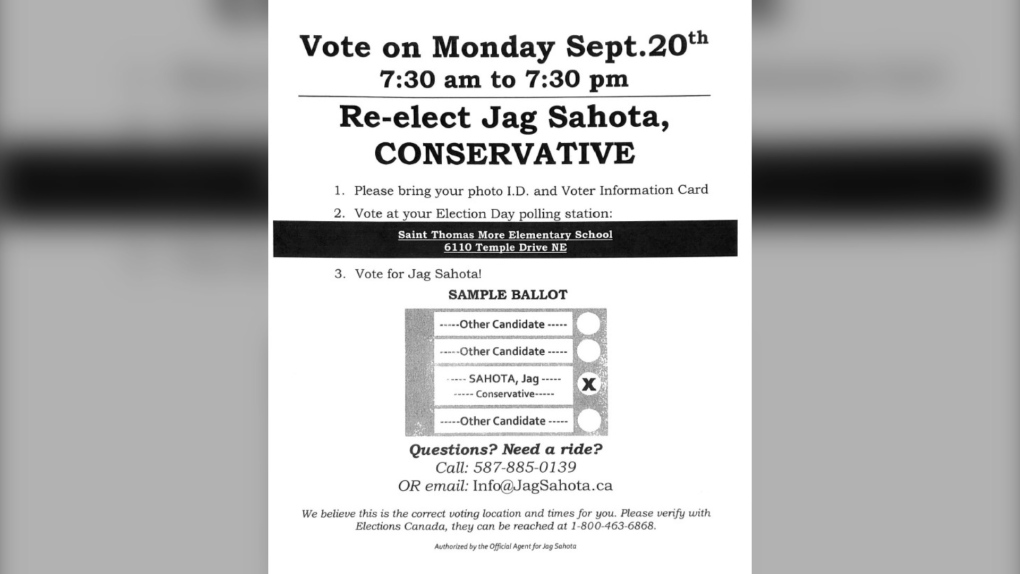 A copy of the flyer left by Jag Sahota, which she says was taken by Liberal candidate George Chahal. (Supplied)
CALGARY -

Lawyers for a Conservative candidate will ask the court to set aside the result of last week's federal election in the riding of Calgary Skyview while officials investigate allegations another candidate removed her campaign literature from a doorstep and left a flyer with an incorrect polling address.

"We have begun drafting and hope to file in a week or so," said Kyle Shewchuk with Guardian Law Group, the firm representing Jag Sahota.

Sahota lost to Liberal candidate George Chahal by about 3,000 votes in the northeast Calgary riding.

Footage captured by a doorbell camera the day before the vote shows Chahal appearing to pick up a campaign postcard of a competitor and remove it from a front porch.

A complaint was made by the homeowner, Glenn Pennett, last week to Calgary police, which was forwarded to its anti-corruption unit.

Another complaint was also made to Elections Canada, which was forwarded to the Office of the Commissioner of Canada Election, which is "the independent officer responsible for ensuring that the Canada Elections Act (the Act) is complied with and enforced.

"The Office operates independently of Election Canada, which is the agency responsible for the administration of the federal elections," read a statement.

"In keeping with the confidentiality provisions of the Act, the CCE generally does not confirm whether it has received a complaint or has initiated an investigation into a particular issue.

"The Commissioner can also initiate a review or an investigation of his own initiative, absent a complaint being made. The length of time necessary for a review or investigation can depend on several factors, including the complexity of the file, the level of cooperation from the people or entities involved, and the information shared with the CCE."

Any decisions made by the commissioner will be released publicly.

"They're not about to call for a new election" he said. "There would have to be extensive evidence that this impacted the election for them to do that. Even when we had the robocall issues in Guelph a couple years ago and people went to jail, they never said 'let's re-run the election."

The issue could also be damaging to Chahal's chances of being named to the federal cabinet, said Bratt.

"He's gone from being a superstar to a very murky future in less than a week. Best case, they leave him out of cabinet and wait for this investigation to go through, but it could get worse for him, depending on the decisions made. He could be removed from caucus, he could be fined … there's a lot at play here.

"You have to think that even through there is one video clip, this was not a one-off, and this isn't a volunteer, this was the candidate himself."

"Mr. Chahal and the Liberal campaign in Calgary Skyview received strong support for our positive plan to build a better future for Calgarians and all Canadians, and he looks forward to working hard in Parliament for the people of Calgary Skyview," it read.

"The Office of the Commissioner of Canada Elections does vital work to support our democratic process, and like all of our campaigns, Mr. Chahal and his team will always be available to respond to any inquiries with respect to this recent election."

Chahal's campaign manager, Randall Zalazar, has said he did remove the flyer, but there was a reason why.

Pennett, who supported Sahota, earlier told CTV Calgary he was frustrated and that Chahal shouldn't have removed the paper from his property.

"He's destroying something from somebody he's running against and leaving his card, which was totally the wrong information," he said.

Chahal was the only Liberal to win in Calgary.