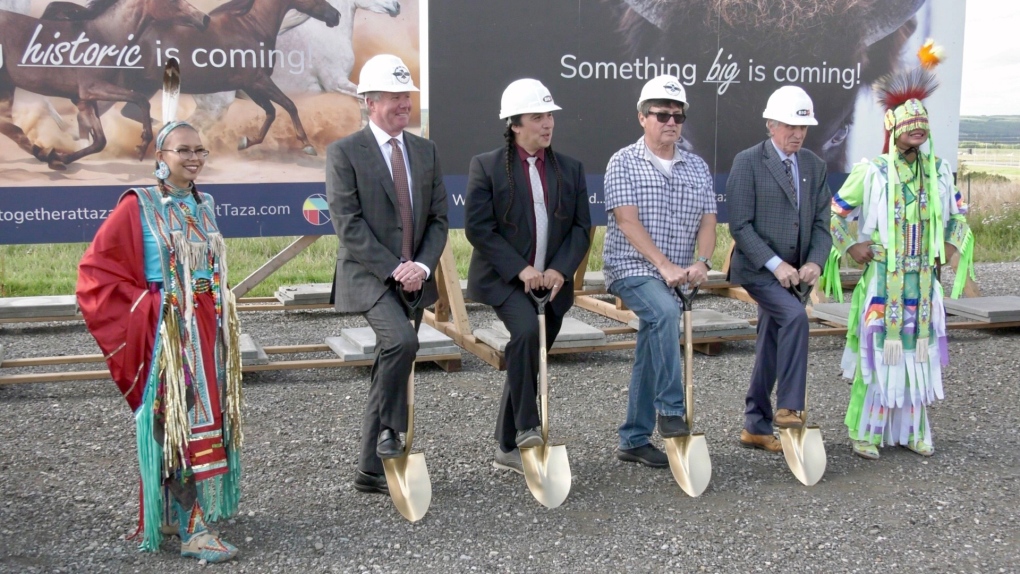 Leaders of Tsuut'ina Nation and members of the Calgary business community formally broke ground Tuesday on a development meant to generate investment and growth.

Situated close to the Grey Eagle Casino, construction was officially started on Taza Park, one of three projects forming a broader development on 1,200 acres of Tsuut'ina Nation land.

Taza Park is planned as a mixed-use community of retail, residential, entertainment space.

At a ceremony acknowledging the first shovels in the ground, officials from Tsuut'ina and Taza announced auto dealerships Metro Ford and Big 4 Motors will be the first anchor tenants in the new development.

Both are relocating from Calgary and plan to be open for business by the fall of 2022.

"This signals a start for something bigger," said Bryce Starlight, vice-president of development at Taza.

"While these are two influential and well-known businesses in the Calgary market, we feel it's the signal of even greater things to come."

"This partnership really shows the Calgary spirit, doing things together and evolving with the shape of the city," said Gerry Wood, president of Wood Automotive Group.

"With the construction of Stoney Trail nearby this site is extremely important, it's just on the edge where lots of exciting cultural and economic activity is going to happen."

While the project is expected to create numerous employment opportunities, Starlight said members of Tsuut'ina will be at the core of the expansive development.

"We'd like to see our Tsuut'ina members take on more senior roles, and we'll be partnering with our tenants to find avenues toward career growth. We'll also be looking for ways for Tsuut'ina businesses to participate both directly and indirectly within the development."

Taza Park is expected to open in the fall of 2022. More information can be found online.

WHO says no urgent need for mass monkeypox vaccinations

The World Health Organization does not believe the monkeypox outbreak outside of Africa requires mass vaccinations as measures like good hygiene and safe sexual behavior will help control its spread, a senior official said on Monday.

A captured Russian soldier who pleaded guilty to killing a civilian was sentenced by a Ukrainian court Monday to life in prison -- the maximum -- amid signs the Kremlin may, in turn, put on trial some of the fighters who surrendered at Mariupol's steelworks.