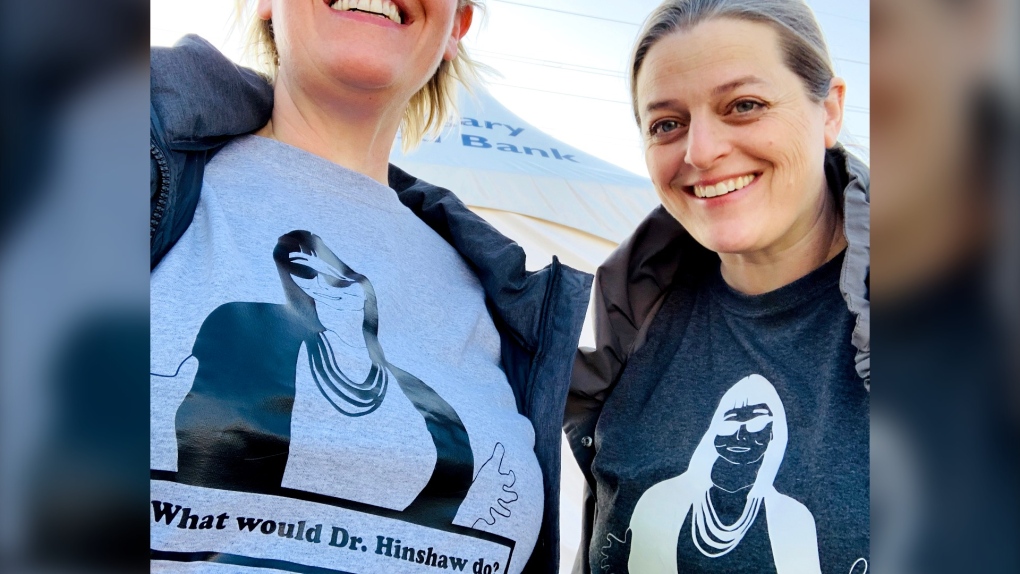 CALGARY -- It started as a simple sketch of Dr. Deena Hinshaw to pass the time of self-isolation but quickly morphed into a much-needed boost for food banks across the province.

Like tens of thousands of Albertans, Alison Van Rosendaal has been at home practising self-isolation since last week as a way of slowing the spread of COVID-19. An assistant principal and a PhD student at the University of Calgary (her classes had been moved online), Van Rosendaal watched the daily COVID-19 update from Hinshaw — the province's medical officer of health — on March 17, then hours later, found herself doodling a screengrab of the doctor.

"I traced a screenshot and stylized it," she said laughing. "I'm not an artist."

On a bit of a lark, she had the image printed onto 10 shirts and gave seven of them away to friends.

The final three she gave to her sister — Calgary media personality Julie Van Rosendaal — who decided to auction them off to her followers on social media.

And that's when things took off.

Rather than receiving bids, the pair were inundated with requests to buy shirts, so they started taking orders, and in just a few days, received more than 2,200, bringing in more than $20,000, which will be donated to food banks across the province. They've since stopped taking orders as the sheer numbers became too overwhelming.

Alison called the original t-shirt shop back to fill the orders, but they had since closed because of the pandemic.

So she reached out to 72 Clothing Company, based in Red Deer, which expects to start shipping orders by Friday.

"He and his kids and his wife and neighbours are doing all the mail-outs," said Alison.

"It's a lot of shirts. It's nice because I know small businesses are struggling and for someone like him to pick up this quantity of work overnight … he's amazing."

This isn't the first time Hinshaw has become a fashion icon of sorts during the COVID-19 crisis. After she wore a dress featuring the periodic table of elements, the Victoria-based designer was deluged with requests, and re-started production on the discontinued line.

"She has this remarkable ability to be calm and clear and put things in context and give guidance that's based on complex information, in ways that people can manage," said Alison. 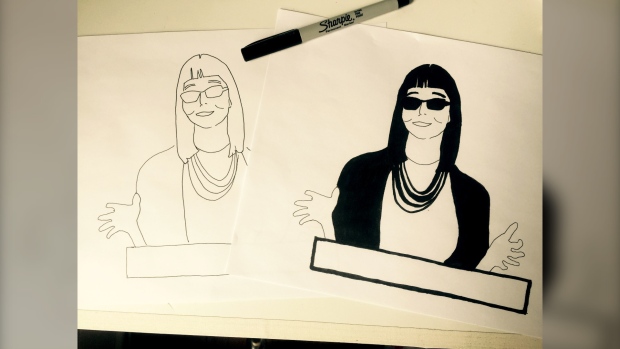 "I think she has a real generosity and a sense of community about her that people need right now. That sense of, 'we are all looking out for each other and the greater good.' And she's doing it with this huge amount of humility."

The province of Alberta has declared a public health emergency and ordered all bars and restaurants to close. Those who can are asked to work from home and practise self-isolation whenever possible, meaning they stay at least two metres away from other people when outside.

Anyone returning from international travel is ordered to self-isolate for 14 days and anyone exhibiting symptoms of COVID-19 — a dry cough, fever, chills, pain and shortness of breath — should contact Alberta Health Services at 811 and self-isolate for 10 days after symptoms have subsided.

As of Tuesday afternoon, there are 358 confirmed cases of COVID-19 in Alberta and two people have died.