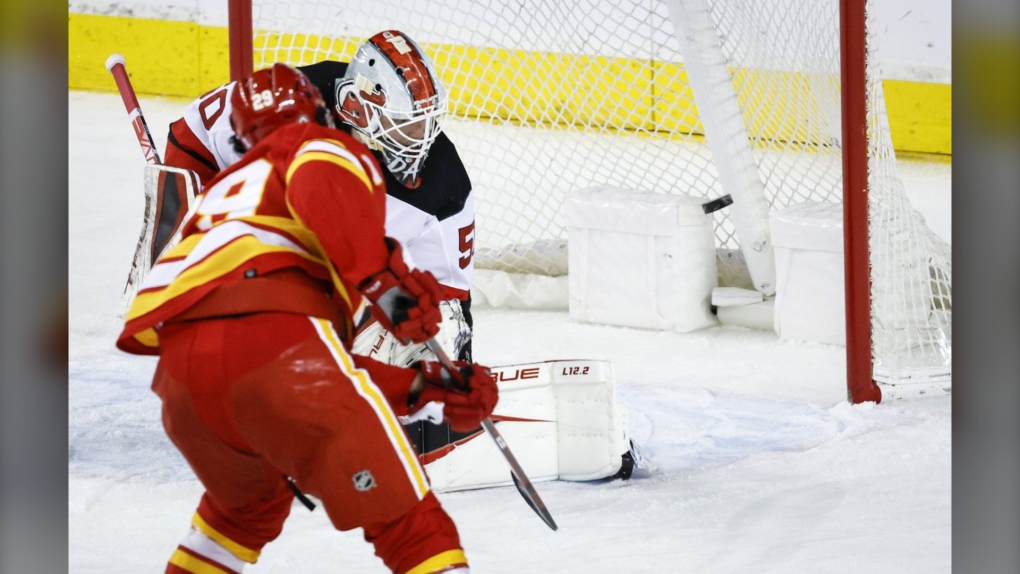 After Calgary's acquisition of Calle Jarnkrok from Seattle earlier on Wednesday intensified the competition for playing time, the Flames' depth players stepped up with a big night.

Led by Dillon Dube's goal and an assist, each member of the fourth line scored a goal to lead Calgary to a 6-3 win over the New Jersey Devils.

"It's competition, very clearly. He's a player who can play anywhere in your top nine," said Flames coach Darryl Sutter, on the addition of the 30-year-old forward. "Other than one line, we've moved guys around all year because nobody's grabbed onto it enough. It's more competition. It's not I'm up and jump over the boards, it's about performance."

Also scoring was Dube's linemates, Milan Lucic, with his first goal in 24 games, and Brett Ritchie. Not only was it the first goal of the season in 30 games for the rugged right-winger, but it was also his first point. It comes on a night when he was originally supposed to be a scratch for the fifth time in the last six games.

Ritchie was re-inserted into the line-up when, to create a spot on the roster, rookie Adam Ruzicka was sent down to Stockton (AHL).

"It makes our lineup a lot deeper, so it only helps us," said Dube, who snapped a nine-game goalless skid. "The investment shows us what we put in is paying off, so it's nice to add a really good player."

Tied 2-2 in the second period, Calgary blew the game open erupting for three goals in a span of less than four minutes.

Putting the Flames ahead for good, Dube took a pass from Tkachuk as he flew into the Devils' zone alone and he quickly fired a shot past Nico Daws on the glove side at 7:04.

Dube has mostly played on the wing, but he played centre against the Devils and Sutter liked his game.

"He was strong getting after the puck, strong using his speed in various parts of the ice," Sutter said. "Won a face-off, too, the first goal is a face-off goal that we scored early. It stays in the zone and Brett (Ritchie) ends up scoring."

Lucic says the trade shows the front office's confidence in the team.

"It gives us confidence," said Lucic, who has 10 goals on the season. "It gives us a belief in ourselves because we've got belief from up top and he's doing what he can to help the team get better here. Now it's up to us to keep doing what we've been doing on the ice."

In exchange for the Jarnkrok, the Kraken got a 2022 second-round pick, 2023 third-round pick and 2024 seventh-round pick.

Andrew Mangiapane, Matthew Tkachuk, and Johnny Gaudreau, into an empty net, also scored for Calgary (37-16-7), which opens up a seven-point lead over Los Angeles atop the Pacific Division. The Flames are 15-1-1 in their last 17 games at the Scotiabank Saddledome.

Dawson Mercer and Yegor Sharangovich had their 15th goals for New Jersey (22-34-5) while PK Subban also scored. Nico Hischier had a pair of assists. The Devils have dropped the first two games of their three-game Western Canada road trip and have lost five straight overall on the road.

Making his ninth consecutive start for the Devils, Daws was pulled in the second period by coach Lindy Ruff after giving up four goals on 19 shots. He suffered the loss to fall to 6-6-0. In relief, Jon Gillies stopped 19 of 20.

"I know a lot of those players over there and they're top players in the NHL," said Gillies, a 2012 Flames draft pick. "The unfortunate part of that is you can do a lot of good things, but when breakdowns happen they're usually going to put it in the back of the net and that's what happened."

At 9:31, it was Tkachuk's turn for a breakaway. Sprung in alone on Erik Gudbranson's long pass from deep in his own end, Tkachuk went blocker side to beat Daws, ending his night.

Things didn't start off any better for Gillies as just over a minute later on his first shot faced, Rasmus Andersson's centring pass was deflected past him by Lucic.

Notes: Mikael Backlund played in career game No. 804, moving him past Al MacInnis into fourth place on the Flames all-time list... Calgary has won its last eight games against New Jersey... Chris Tanev had an assist giving the 32-year-old Flames defenceman a career-high 21 points.

This report by The Canadian Press was first published March 16, 2022.