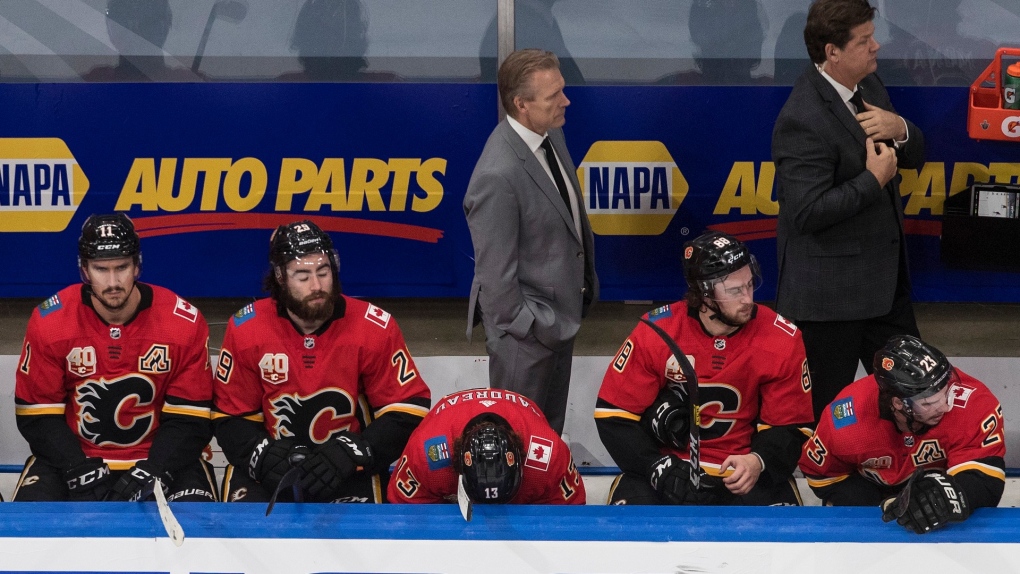 EDMONTON -- The Dallas Stars spotted the Calgary Flames three goals, then ran them out of the rink and out of the NHL playoffs Thursday, crediting a cheeky, inexplicable penalty from Calgary's Milan Lucic for igniting their comeback.

The Flames also served up a side order of controversy, pulling starting goalie Cam Talbot with the game still in the balance, then offering up differing reasons for doing so afterward.

Denis Gurianov scored four times and added an assist as the Stars scored seven unanswered goals to beat the Flames 7-3 at Rogers Place and advance to meet the Colorado Avalanche in the next round.

The Stars won the best-of-seven series 4-2.

The Flames scored three times before the game was seven minutes old and were in control, buzzing around and blasting pucks at Dallas goalie Anton Khudobin, when Dallas head coach Rick Bowness called a timeout to regroup the troops.

"It was one of those moments where I think everyone understood we haven't played our game. We're seeing their best game. Pucks are exploding off our sticks at that moment and we're in a hole," said Stars forward Joe Pavelski.

Miro Heiskanen then blasted a point shot past Talbot on the power play and Dallas never looked back.

"That power play goal was enormous for us," said Pavelski. "It kind of stopped their push. It got us back in that (first) intermission down by two goals.

"We were allowed to come back out, understand there's 40 minutes of hockey left to score a couple of goals and tie this up, and obviously we had a huge second (period)."

The Stars scored five goals in the second frame to blow the game open. Talbot has been the Flames' rock in the playoffs, starting all 10 games and recording two shutouts.

Nevertheless, after Dallas tied the game at 3, head coach Geoff Ward pulled him for David Rittich, who had not played a game in six months due to the NHL's COVID hiatus.

Rittich allowed three goals on nine shots, fought the puck and gave up big rebounds before Talbot replaced him at the start of the third period.

Talbot said he didn't begrudge Ward giving him the hook.

"Some of the shots are obviously save-able and the onus is on me there," said Talbot.

"As much as I hated getting pulled, the momentum was changing and (Ward) had to do something."

Ward, however, said he pulled Talbot just to give him a breather and fix an equipment issue - an equipment problem Talbot didn't mention.

"I don't think I made a mistake (pulling Talbot)," said Ward.

"The plan was to get (Talbot) out, get him refocused and get him back in.

"And he had an equipment issue. He had to go down the tunnel and get some equipment fixed."

Ward added: "It's probably an unfair spot to bring (Rittich) into with how little he's played since returning."

Heiskanen had a goal and three assists for Dallas. Pavelski and Radek Faksa also scored. Khudobin made 38 saves.

Heiskanen has three goals and nine assists in the post-season, which includes three round-robin games.

The Flames were without top regular season scorer Matt Tkachuk. Tkachuk was knocked woozy on a hit in Game 2 and did not play again. He watched the game from one of the arena suites and the TV cameras caught him walking away or putting his head in his hands as his team imploded.

All Western Conference games were played in front of empty seats at Rogers Place, with players isolating between contests in a so-called bubble to prevent contracting COVID-19.

It's the second consecutive year the Flames have been bounced in the first round of the playoffs. They lost last season to the Colorado Avalanche.

In the end, the Flames didn't get production from their big guns, they missed Tkachuk, and they wasted a superb post-season performance from Talbot.

The top line of Gaudreau, Elias Lindholm, and Sean Monahan collectively registered two goals and seven assists in six games, and were invisible at even strength.

Tkachuk, aside from his ability to rile up the opposition, was the offensive ignition switch for the Flames. He led the team with 61 points (23 goals, 38 assists) in the regular season.

Without him linemate Mikael Backlund registered two goals and one assist and Mangiapane had one point in the series, tying him with Khudobin and Dallas goalie Ben Bishop, who each had an assist.

The Stars played Stars hockey - suffocating defence and opportunistic offence, taking away time for the Flames to make a play and the space for them to make it.

Now the Stars have more space in the bubble, and the Flames have nothing but time.

This report By The Canadian Press was first published August 20, 2020.