CALGARY -- Construction crews have spent the last nine months building a steel berm to hold back flood waters under Glenmore Trail at the Bow River along Heritage Drive.

It’s 480 metres long and the vertical lengths of steel were vibrated into the ground up to five metres deep.

“It feels like the ground was shaking and anchors for power poles we had to protect so we don’t disturb the earth that is around them,” said City of Calgary senior transportation engineer Alex Saba.

Saba says the bulk of the work was completed without any complaints from surrounding businesses.

Andrew Forsyth is a planning engineer for the City of Calgary who’s worked on the project since 2015.

“The steel sheet piles were the optimal solution here because they occupy little space and the construction footprint is low as well,” said Forsyth.

In 2013 the area was completely under water.  The city says it’s one of the most vulnerable locations due to its proximity to the water; the road surface is close to the level of the water when there isn’t a flood. 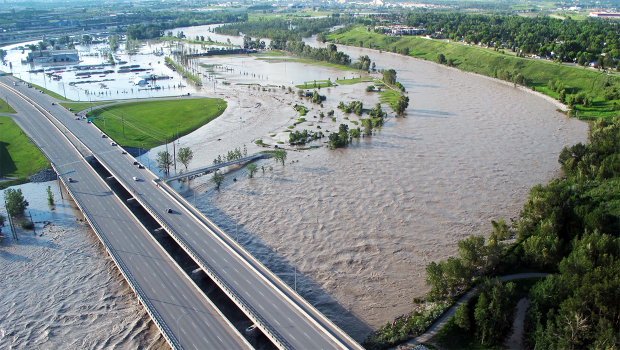 It’s also an important route for first responders because it’s the link between westbound Glenmore Trail and northbound Deerfoot Trail.

The province contributed $7 million of the $10.5 million total for the project, which is on time and budget.

It’s designed to hold back the level of water the Bow River reached at its peak in 2013.

“Primarily we want to get to that 2013 level protection," said Forsyth. "We add a bit to account for uncertainty but the design is the 100 year (water) level.”

The flood barrier wall will be complete this May in time for flood season and crews will spend another two months landscaping and cleaning up the area until some time in July.