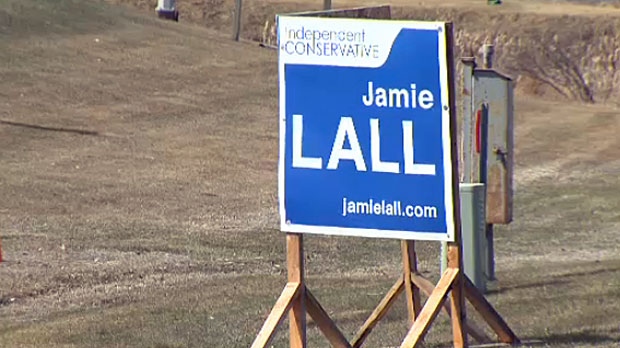 Jamie Lall is running as an independent in Chestermere-Rocky View.

Jamie Lall says he was forced out of a Progressive Conservative Association of Alberta nomination in a southern Alberta riding and has released text messages that he says proves he was targeted by the Tories.

Lall was challenging incumbent Bruce McAllister for the nomination in Chestermere-Rocky View and says he was approved to run as a candidate at the end of March.

McAllister, a former Wildrose MLA, crossed the floor to join the PCs and Lall says texts between himself and PC Executive Director Kelley Charlebois and former Justice Minister Jonathan Denis show his nomination was being undermined.

Among the communications to Lall was a text dated January 31 from Charlebois in which he told Lall "(I) don't want you in Chestermere."

Lall says he was given no reason for the disqualification and that he has a text from Jonathan Denis that suggests he was being set up.

Alberta Premier Jim Prentice says the party had good reason to disallow the candidate from seeking a PC nomination in Calgary.

Prentice says Lall knows full well why he was pulled and that it is up to Lall to make those reasons public.

Prentice says that, after careful vetting, only a handful of potential candidates of the hundreds seeking to run for his party were rejected.

Lall is now running as an independent in the riding of Chestermere-Rocky View.

(With files form The Canadian Press)