Group that held rally in Calgary says masks are 'harmful'

CALGARY -- A group who says they refuse to allow mandatory mask rules to become part of the new normal because of COVID-19 staged a rally at Calgary's Olympic Plaza Sunday.

The organization, called March to Unmask, gathered across from Calgary City Hall at 1 p.m.

According to its Facebook page, it says it held the event in solidarity with similar ones being held across the country.

"Just recently the City of Toronto passed a law to make masks mandatory in indoor spaces and other jurisdictions have followed suit or are considering doing so. We will not allow this to become the new normal in our communities as prolonged unnecessary use of masks can be harmful to your health and most masks offer you no protection." 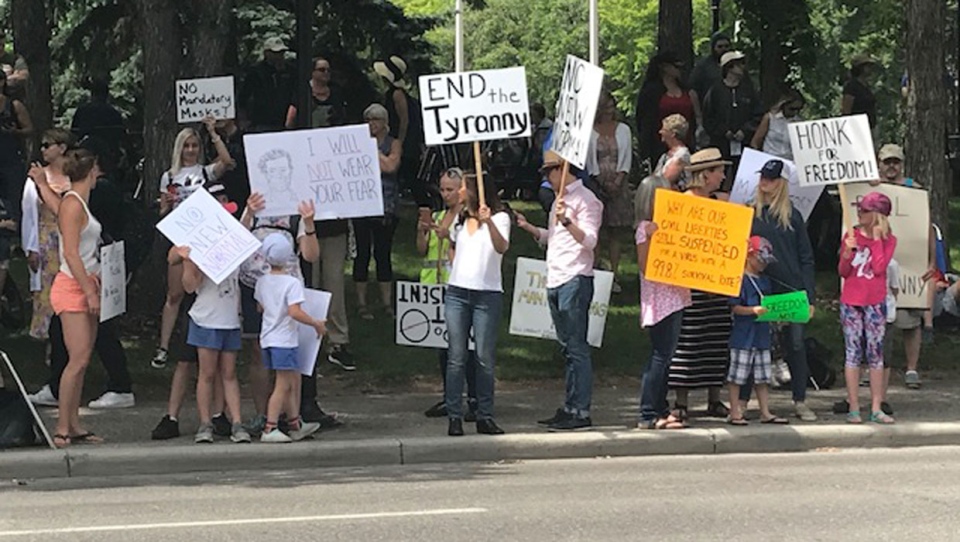 The organization were joined by members of a similar group who are against mandatory masks but are also in opposition to the UCP government's Bill 10.

Bill 10, which was passed earlier this year, grants special powers to authorities to help enforce the Public Health Act.

Carla, one of the protesters, says she supports the movement because she disagrees with the way the government approached the COVID-19 pandemic.

Meanwhile, an opposing group made up of concern doctors and citizens are pushing council to make a mandatory masking bylaw in Calgary.

Masks4Canada says it sent a letter to Calgary city council outlining the need for such legislation. It adds "rigorous measures" need to be taken to control the spread of COVID-19.

"(He needs to) demonstrate leadership on this motion, and given his recommendation to wear a mask, to support broader, more effective face mask-related measures, in addition to hand hygiene and physical distancing," the group said in a release Friday.

Kenney has stood back from the idea of installing blanket enforcement for mask usage in Alberta, preferring to leave that decision about bylaws up to municipalities instead.

So far, mayor Naheed Nenshi is concerned that not enough Albertans are wearing masks and that could lead to higher rates of spread of COVID-19.

He says studies show if 75 to 80 per cent of people agree to wear masks in public, that's "as good as the kinds of isolation we put in place in March and April."

"It's a relatively small sacrifice to protect others. I want to remind everybody that the mask doesn't protect you, it protects other people from you."

Edmonton's mayor Don Iveson says it should be up to the province to make any decision on whether or not Albertans should wear masks.

The province will continue to leave the decision about additional measures involving masks up to municipalities, but stresses that wearing one when you cannot physically distance from others is essential.

"We continue to strongly recommend that all Albertans wear a mask whenever physical distancing is not possible. Wearing a mask when you’re not able to stay two metres distant is part of our new normal," said Tom McMillan, assistant director of communications for Alberta Health. "Limiting the spread of COVID-19 depends on all of us. Each of us must do our part in helping protect each other."

Calgary council will be meeting Monday to discuss a possible mask bylaw.