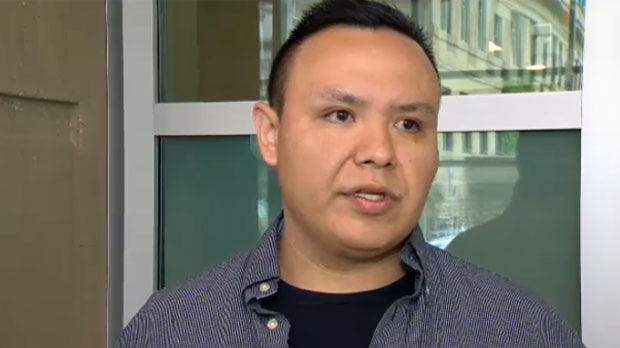 Blaine Manywounds, 32, seen in this 2017 file photo, is facing charges after shots were fired during an attempted truck theft near Airdrie. (File photo)

CALGARY -- A Calgary man is facing numerous weapon-related charges after a suspect and a neighbour fired shots at each other during an attempted truck theft near Airdrie last month.

Airdrie Rural RCMP was called to a property near Range Road 25, west of Airdrie, about 3:15 p.m. on Jan. 26 after a homeowner spotted someone trying to steal their truck from the driveway.

"As police were en-route, a neighbour arrived and approached the suspect," police said in a release.

"The suspect fired a shot at the property owner and neighbor, and the neighbour returned fire in self defence. Thankfully no one was injured during this exchange."

Members of the Airdrie, Cochrane, and Red Deer detachments set up containment awaiting arrival of the emergency response team and police dog.

The man refused to surrender and the police dog was used to take a suspect into custody.

Manywounds remains in custody and is scheduled to appear in Airdrie provincial court on Feb. 11.

In 2017, Manywounds was found not guilty of manslaughter in connection with the 2014 death of 35-year-old Brian Blackkettle, according to court records.

Blackkettle was found unconscious in Century Gardens Park in downtown Calgary on July 17, 2014. Police determined Blackkettle had been struck by another man and Manywounds, who said he had remained in the park and cooperated with the police investigation, was identified as a suspect.

Manywounds has a lengthy court record, which includes charges for possession of stolen property, driving without insurance, possession of a controlled substance and break-and-enter in 2019 and 2020.