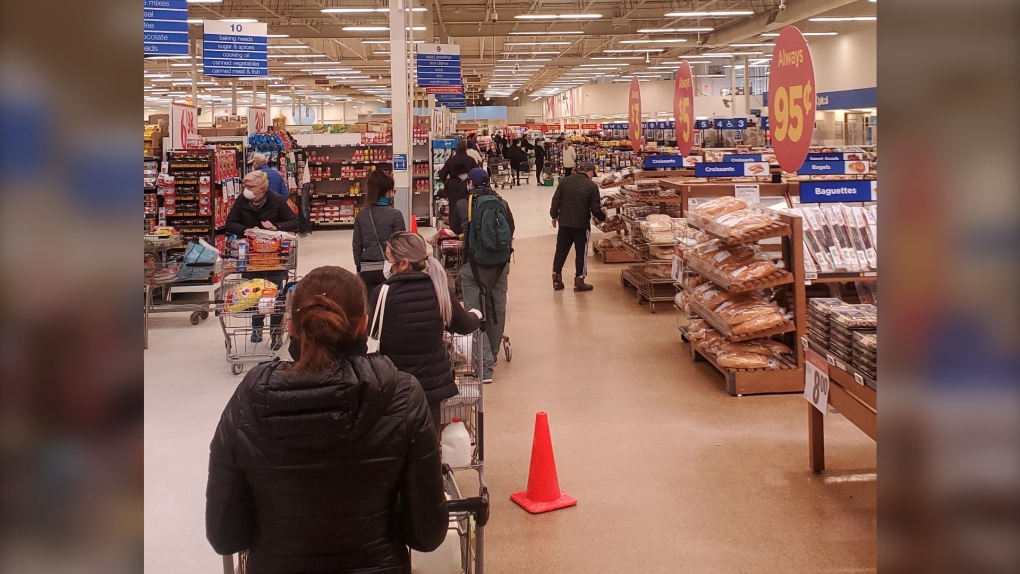 The checkout lineup at the Signal Hill Superstore in Calgary on April 8, 2020.

CALGARY -- While toilet paper, hand sanitizer, rice and flour have been in high demand in Canada since the onset of the COVID-19 pandemic, there have been considerable spikes in the sale of condoms, coffee filters and hair dye in the weeks that followed.

According to data compiled by Statistics Canada, noticeable pandemic-related trends emerged in Canadian grocery sales beginning in early March — before international travel bans were introduced and states of emergency were declared in nearly every province.

In the week ending March 21,  retail grocery store sales were 40 per cent higher than sales in the eleventh week of 2019.

The much publicized demand for toilet paper — and unsubstantiated concerns regarding supply — resulted in an initial spike in sales of nearly 300 per cent over the same week in mid-March 2019. While sales remained strong into April, toilet paper sales in the week ending April 11, were only 81 per cent higher than the sales in the same week in 2019.

As Canadians adapted to self-isolation, social distancing guidelines and the closure of non-essential businesses, there were noticeable swings in the sale of beauty supplies, alcohol, and prophylactics, as well as items needed for home-brewed coffee.

Canadian Consumers Adapt to COVID-19: A Look at Canadian Grocery Sales up to April 11 found the following sale trends: