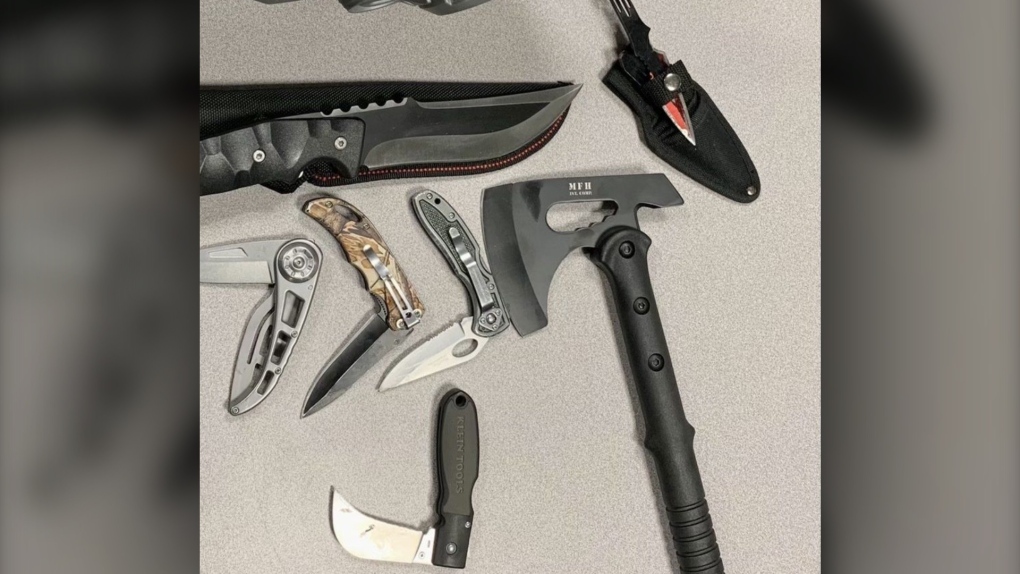 A tactical hatchet and several knives were seized during a Saturday evening traffic stop in connection with an incident at a Lethbridge Walmart where an employee was threatened at knifepoint. (LPS)
CALGARY -

A man and a woman were arrested for the second time in a week in connection with thefts in the Lethbridge area including an incident where a worker was allegedly threatened at knifepoint.

Lethbridge Police Service members, including the canine unit, were deployed Saturday evening following reports a man had pulled a knife on a Walmart employee who attempted to stop the theft of items.

The suspect was spotted fleeing the store in the 3000 block of 26th Avenue N in a vehicle and officers successfully stopped the getaway attempt.

A search of the vehicle resulted in the seizure of a tactical hatchet, several knives and merchandise believed stolen.

Johnston, who remains in custody, faces one charge of robbery and two counts of possession of a controlled substance (methamphetamine, fentanyl). He is scheduled to appear in court on Wednesday.

Betts was charged with failure to comply with a release order. She was released from custody ahead of her Nov. 1 court appearance.