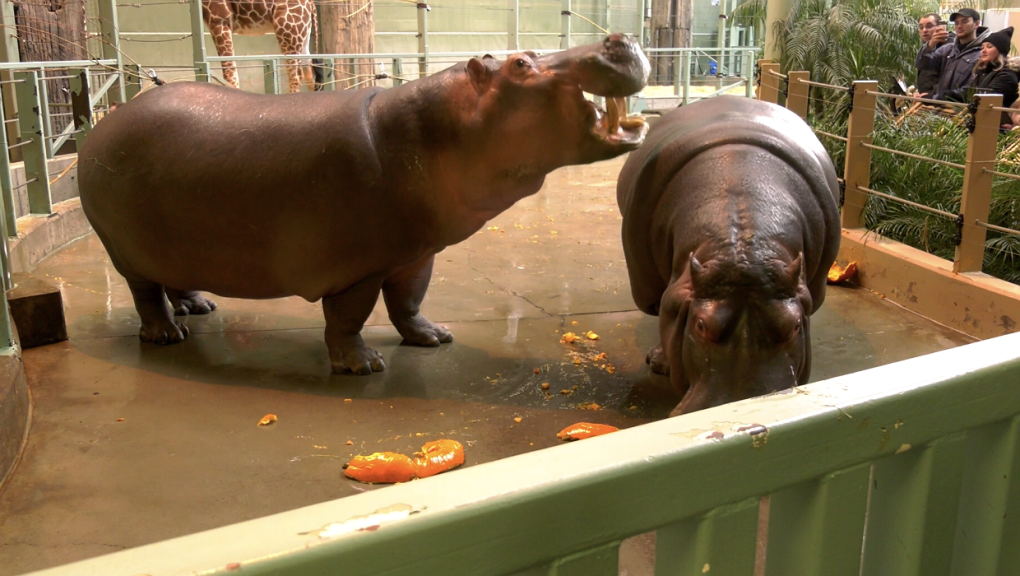 Libo, now 13, munched away on hay and pumpkins with his 32-year-old grandmother, Sparky.

Halloween spirit spread all the way to the Calgary Zoo Thursday, as a pair of hippos were treated to celebratory pumpkins.

Lobi, now 13, munched away on hay and pumpkins with his 32-year-old grandmother, Sparky.

Mona Keith, a lead keeper at the Calgary Zoo, said these events are about more than a simple snack.

“We just take advantage of it to do something more enriching,” she said. “Our goal as a zoo keeper is to try and keep the animals active mentally, physically, and keep them engaged in things.

“So it’s always nice to do something different.”

In front of a curious crowd, Lobi gulped down a sizeable amount of hay before directing his substantial appetite on the pumpkin.

“Hippos are grazers,” Keith said. “In the cool evenings in Africa, they’ll come out of the water and graze the grass, and that’s what they like to eat, they like the bulk.”

Pumpkins, on the bland side of most fruit, will always come second to a hippo. That didn’t stop Lobi from making quick work of his birthday treat.

At the sprightly age of 13, Keith said Lobi has a lot birthday pumpkins to look forward to.

“Hippos live until their mid to late-40s, so he’s still a young guy,” she said.

Lobi got his name as a gesture of respect to an ethnic group of people in Ghana, who are instrumental in maintaining a conservation area in that country.

Lobi and Sparky can be viewed daily in the African Savannah area at the Calgary Zoo.