CALGARY -- The work being done inside the tarp surrounding old city hall is somewhat of a mystery.

Stone masons have been hard at work for the last three years assessing and replacing many of the 15,000 blocks of sandstone used on the exterior of the structure.

Alex Boyd, 29, is one of 24 stonemasons who have worked on the project. Boyd specializes in carving the ornamental sandstone pieces on the building. His love of carving started early.

"I used to go to the local cathedral, which is the Wells Cathedral, which is (in) the smallest city in England," said Boyd. "I would walk around the cathedral with my grandma, with my head up in the sky, just looking at all this amazing stuff and she'd said, 'why don’t you apply for an apprenticeship here and see what it’s all about?'”

Michael McLeod, the project manager for RJW Stonemasons, is responsible for the specialized carvers that come from many different parts of the world. McLeod says the sandstone that’s being used for this project will last longer than what was quarried in Calgary between 1907 and 1911 when city hall was built.

The challenge for his eclectic group of 21st-century stonemasons is matching old stone to the new.

"Very difficult process of finding a balance between what might have been used in the past, but which is no longer available and what the best stone is for the the purpose," said McLeod. 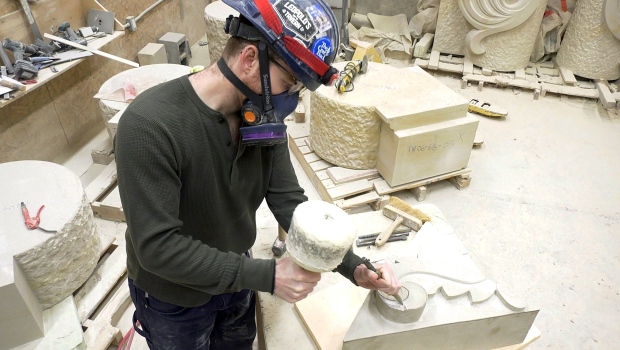 Jilian Henderson, with the city, says the $34-million project is on time and budget.

"What you’re going to see is a very similar building to what we had before," said Henderson. "When you get up close you’ll see a slight differentiation, like minor, between the original and new sandstone, but that will fade over time."

Henderson says Calgarians have a unique opportunity right now that won’t likely happen for another 100 years and that’s seeing the historic clock that’s housed in the tower up high on old city hall. Right now the restored clock is in the atrium of new city hall.

"It’s a once-in-a-lifetime opportunity to see it," Henderson said. "This clock is actually one of 50 of its kind that were ever manufactured and one of the only remaining time pieces of its kind in Canada."

The clock will be installed sometime in the next few months but its workings will be hidden and only the face will be seen above old city hall.

City planners are working on some sort of celebration that will take place when the project is completed this fall.