'I feel kind of silly': Calgary student warns others about online selling scam after falling victim

CALGARY -- Torin Haslam was trying to make some extra money to help pay for his tuition, so the university student put a spare laptop of his up for sale online.

He found a buyer within hours, but days later he’s out a laptop and is still without payment in what he believes to have been a scam.

"I put (the laptop) up on Kijiji and within 12 hours I got a response via text message," Haslam said.

But the buyer had several conditions for the sale. Conditions, Haslam admits now, that should have raised red flags.

"He wanted me to ship the laptop to his cousin in Miami, Florida and he said he would give me extra money to do it," he said.

Haslam obliged, shipping the brand new laptop through Canada Post. He sent the buyer the tracking number and received an email that appeared to be an Interac E-transfer. But the email said it wouldn’t allow Haslam to collect his money for 24 hours, until further confirmation that the laptop had been shipped was received.

Interac’s website states it "does not offer an escrow service" and says customers should "not assume you will be able to receive money until you can confirm that it is in your bank account." 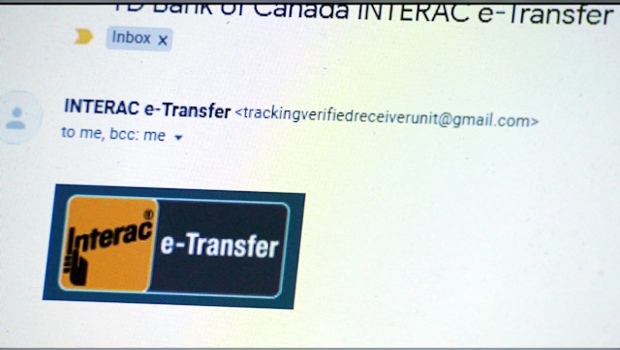 "So that was a pretty good indicator that this guy was just trying to get away with a free laptop," Haslam said.

The Better Business Bureau says online selling and buying scams are among the top three complaints it receives.

"You may want a quick sale, but it’s always best to take your time and do research," said Shawna-Kay Thomas with the BBB.

When he looked closer at the email money transfer, Haslam noticed it was sent from a generic Gmail address.

He also realized the phone number the buyer was messaging him with used an area code from Ontario and, when he tried to call, it stated that it was a number used for a "text to email service."

"I feel kind of silly. I never really thought I could get scammed," Haslam said.

Haslam said he will now spend more time checking potential buyers before selling anything else online.