CALGARY -- What started as a university art education project has grown into a community building exercise in Cochrane.

Amy Brandt is studying to be an art teacher.  Her instructor at the University of Regina challenged the class to create an art project that brought people together in a COVID safe manner.

The 19-year-old student texted a few moms she knew in her Cochrane neighbourhood with the idea of starting a sidewalk art weekend event.

She had no idea it would take off.

When Horse Creek Candy and Gifts donated boxes of candy as prizes the race was on. One budding Picasso, five-year-old Samuel Buschert said that’s what drew him in.

“You can win lots of cool stuff,” said Buschert, who also said sidewalk art opens a world of possibilities for a young imagination “You can be really creative and you can do anything you want.”

Across town, five-year-old Adalynn Brandt is drawing a dress on the character she’s sketched out on her parent's driveway. 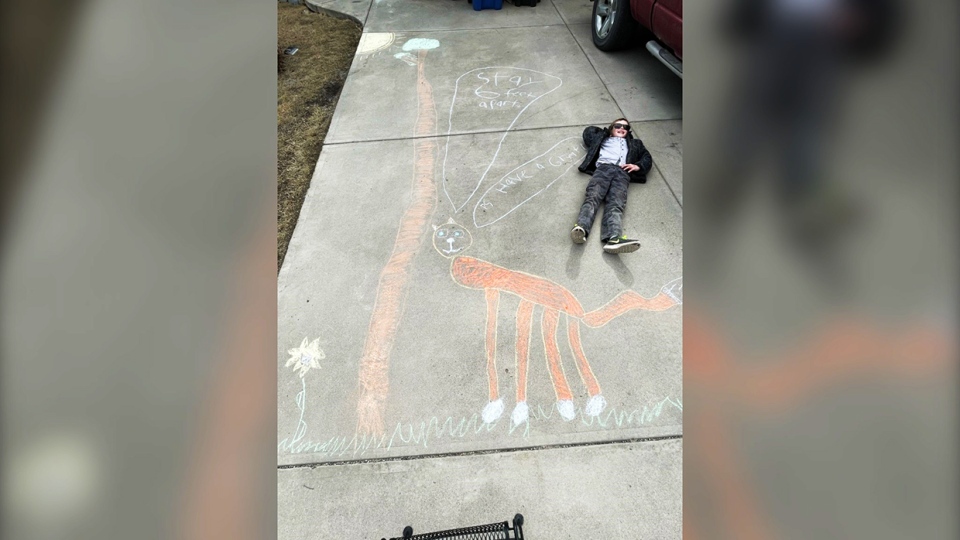 Her mother, Chelsea said that during a time when everyone is struggling to stay connected, a project like this creates a sense of community.

“We spent some time yesterday looking through all of the other posts and it was neat to see some of our friends do it and see what they did , so I think it definitely encourages a little bit of community even though we're all spread all over the place," she said.

In another Cochrane neighbourhood Finley and Declan Reid have covered the sidewalk in rainbows, flowers and animals.  While five-year-old Declan is just having fun with the sidewalk chalk his big sister is ‘in it to win it’ with a lot of her friends taking part as well.

“I started seeing everyone else’s work and then i though that I was doing good.”

Watching from the side their mom Brooke Reid said she was thrilled with the way the weekend art event brought people together.

“I think it's great, especially during COVID it's hard to have big community functions anymore," said Reid. “If we can participate in a community events, but do it individually, then it's a good idea.”

Amy Brandt wanted all the participants to know that what they’ve created is a worthwhile piece of art, no matter how old the artist was, or how temporary a chalk drawing may be.

“Because when I was younger, I heard everyone who had an art project, say things like ‘I'm not an artist’ or ‘don't judge me on this," said Brandt.  “And in my head, I always thought who told you it was wrong?’   Everyone is an artist!"

With that in mind, Brandt is not judging the art. Instead, she’s taking all the pictures of sidewalk art that have been submitted, and conducting a draw. Winners will get candy boxes from Horse Creek Candy and Gifts.

Brandt said there might be a chance more young artists will get to take home some loot in the future, saying she’s already had several requests to hold more community art events in Cochrane.