'It was like reliving a nightmare': Calgary boy hospitalized by same condition that led to sister's death 18 years earlier

CALGARY -- Parents of a six-year-old Calgary boy who spent months recovering in the Alberta Children’s Hospital from the flu and subsequent condition are hoping their story will motivate others to get vaccinated against influenza.

“This doesn’t just help you or your children, it helps my children, and it helps Daniel. It helps other kids who may potentially have a genetic disorder that could bring on an ANE episode for them,” Keith Audley, Daniel’s dad told CTV News.

Daniel came down with the flu in April 2019 and was rushed to the hospital when his condition deteriorated.

“He had vomited early and then he wasn’t standing up,” said Stacey Audley, Daniel's mom.

The six-year-old had swelling in his brain stem and spent two weeks in the ICU, ten days of which were in a coma, according to Stacey.

"At that point, we were on minute to minute," Keith said.

What is acute necrotizing encephalopathy?

Otherwise known as ANE, the disease is characterized ‘by brain injury that usually follows an acute, mostly viral infection,’ according to the group ANE International.

The condition can start with typical flu-like symptoms.

The Audleys were very familiar with ANE:  daughter Rebecca had been diagnosed with ANE in 2002 at the age of two. She died within hours of being rushed to the hospital. 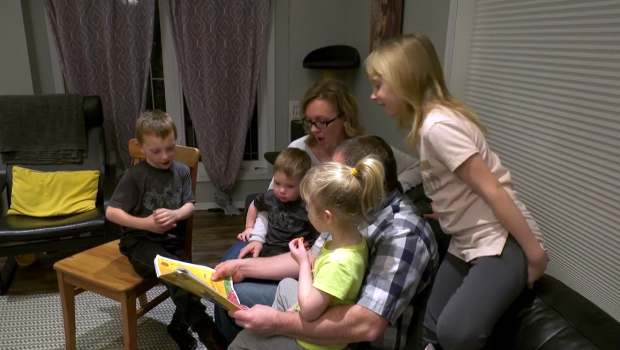 “At the time we when we lost Rebecca they told us it was a one in a million. This kind of thing never happens,” said Stacey Audley.

More research is needed, but the Audleys say they’ve been told there is a genetic component as to why two of their children got ANE.

Daniel is now back and home, after spending months in the hospital relearning how to walk, talk and eat.

"The way he bounced back is nothing short of miraculous to me," Keith Audley said.

The six-year-old is also back in school, where the desks are wiped down during breaks and his classmates regularly use hand sanitizer.

It’s unclear if another ANE episode is in Daniel’s future.

“Unfortunately most kids don’t make it through their first episode," said Stacey. "If they have another one, it’s usually not good,”

The family is grateful to the doctors, nurses and staff at the Alberta Children’s Hospital. Some of the healthcare professionals that treated Daniel also treated Rebecca in 2002.