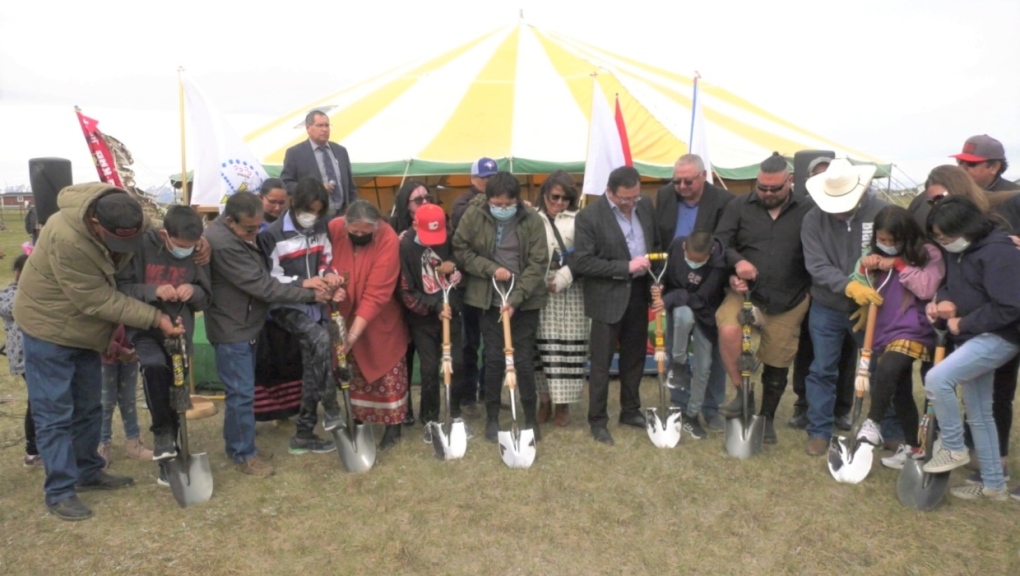 Members of the Kainai Board of Education, Blood Tribe and Indigenous Services Canada joined together on May 17, 2022 at the ground breaking ceremony for the new Aahsaopi Elementary School.

Members of the Kainai Board of Education (KBE), Blood Tribe and Indigenous Services Canada (ISC) joined together on Tuesday at the ground-breaking ceremony for the new Aahsaopi Elementary School.

It's a project that the KBE says needed to happen.

"There was a lot of talk with people saying that we need a new school," said Chairman Mike Bruised Head.

"I said 'okay, we need a new school and I'm going to do something about it.'"

The existing Aahsaopi Elementary School is thirty years old and has many structural concerns including mold and water damage caused by burst pipes, the shifting of a gymnasium wall and roof issues due to heavy winds.

Bruised Head says he has been working hard to make this happen for five years, and Tuesday's ceremony helped the reality of it set in.

"I saw the little kids, students, being part of the sod turning ceremony, and I think that's when it hit me," he said. "This is really going to happen."

The new school will be located in the lot directly beside the current school.

The plan is to bring innovative approaches to 21st century learning.

"We would be able to have multiple grade levels sitting together," said KBE Superintendent Cam Shade.

"We'd really be able to create and foster that collaboration amongst our classes and our teachers."

The building will also be net-zero carbon, as it will use a geothermal heating system, solar power and wind energy.

The school will be able to support 500 to 600 Kindergarten to Grade 5 students.

They will be earning the standard Alberta curriculum as well as taking part in courses to learn the Blackfoot language and Indigenous history and culture.

Michael Oostendorp from ISC emphasized the importance of putting funding towards the future of indigenous youth.

"It's to see the smile on the children’s faces and to think in two years from now we'll have a new school for them," he said. "For them and for future generations."

The new Aahsaopi Elementary School is expected to cost $41 million, with $36 million coming from ISC and the remainder coming from the Blood Tribe and Kainai Nation.

"It's going to be a really enjoyable education or elementary experience for these kids," Bruised Head said.

The school's initial groundwork is set to start within the next week and construction is expected to be completed by January 2024.