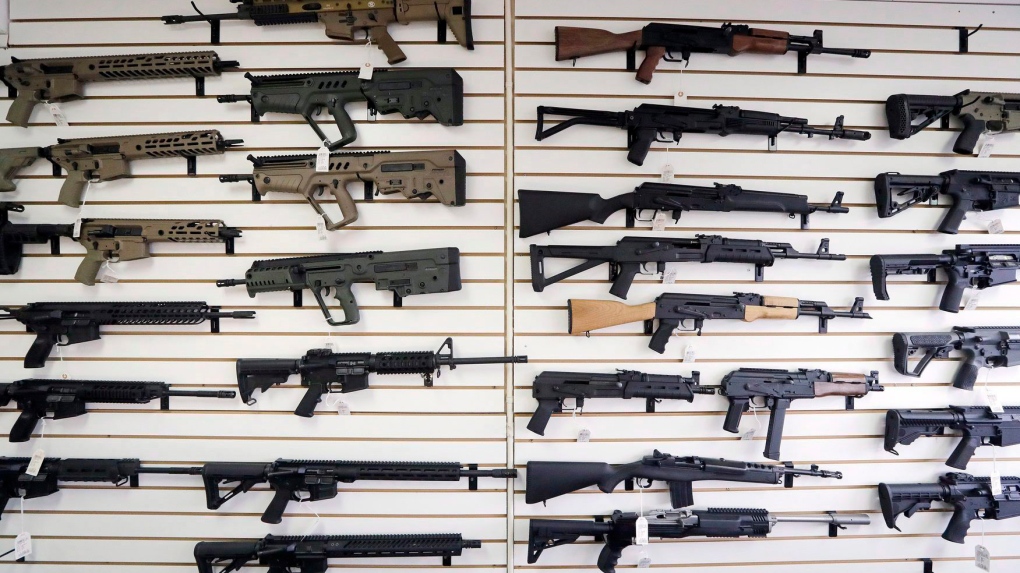 In this Oct. 2, 2018, semi-automatic rifles fill a wall at a gun shop in Lynnwood, Wash. Starting Tuesday, Jan. 1, 2019. The federal government is poised to ban a variety of assault-style rifles. THE CANADIAN PRESS/AP-Elaine Thompson

CALGARY -- The federal government has announced tough new rules against assault weapons, but Premier Jason Kenney isn't happy with them.

Many of the firearms included on the list have been used in a number of mass shootings in Canada and around the world, including the recent incident in Nova Scotia.

During the announcement, Trudeau restated his position that guns designed to kill the most people in the shortest amount of time have no place in Canada.

In a statement released Friday, Kenney said while the Alberta government is concerned about crime and the illegal use of firearms, the ban won't target criminals.

"Ottawa is singling out law-abiding Canadians who purchased their property legally, have owned these items safely for years, and who have committed no crimes," he wrote.

"We know that the overwhelming majority of firearms used criminally in Canada are smuggled in illegally from the United States. Instead of addressing this, Ottawa will instead spend vast sums of money to criminalize law-abiding Canadians. That money would be far better used to pursue the smugglers and drug gangs that plague our society."

Instead of a ban, the Alberta government says stronger laws against violent criminals are needed.

"Rather than focus on law-abiding Canadians, we’d call on Parliament to bring back tough, mandatory sentences for the criminals who flagrantly endanger Canadians with their use of illegal guns," said Alberta Justice Minister Doug Schweitzer in a statement.

Last year, the Alberta legislature passed a motion to recognize Albertans' right to responsibly own and possess firearms and engage in permitted activities using firearms including, but not limited to, hunting and sport shooting.