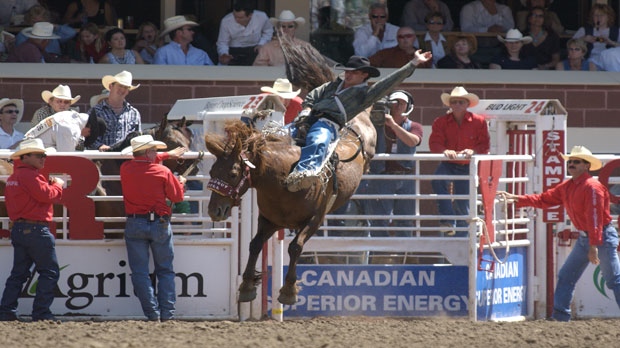 CALGARY -- Rodeo fans love the thrill of a bronc exploding into the ring, cowboy temporarily aboard. How the horse feels about it hasn't been so clear.

Newly published research out of the University of Calgary looks at three years of roughstock events from that city's Stampede in an attempt to peer inside the mind of an animal about to let 'er buck.

“I try to understand the animal's perspective,” said Ed Pajor, a professor of veterinary medicine. “We asked the question whether or not horses find participating in the rodeo to be an adversive experience or not.”

Horses have all kinds of ways of showing they're unhappy, Pajor said. They might move back and forth, chew their lips, swish their tail, defecate, roll their eyes, paw the ground, toss their head, or rear up in protest.

The researchers found that the more people were around them, the more likely the horses were to show unease. That's probably because they spend most of their time in fields and pastures and aren't used to the bustle, Pajor said.

The other factor that affected behaviour was experience. If it wasn't their first rodeo, the horses were much less likely to act up.

There could be different reasons for that, he suggested.

“We don't know if that's because they're used to the situation or whether that's because of learned helplessness - they realize there's nothing they can do and just give up.”

“When the cowboys came near the horses, they would certainly react and you wouldn't really see that if it was learned helplessness.”

The researchers also noted that the horses' bucking performance, as revealed in the score from the rodeo judges, didn't seem to be reduced by repeated appearances as it might be if the animals had become apathetic.

That doesn't necessarily mean the horses are having a good time, said Pajor, who's also on the Stampede's animal welfare advisory board. There are a couple of ways of interpreting active behaviour in the chute, he said.

“Understanding if animals like to do something is a tricky thing to do.”

Pajor knows there are different camps when it comes to rodeos and animals.

“People have very strong opinions on the use of animals for all kinds of reasons. I think no matter what we're going to use animals for, we really need to make sure that we treat them humanely.

“My job is to do the research to understand the animals' perspective.”

This report by The Canadian Press was first published Feb. 28, 2021.